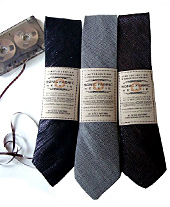 But we think we've found a worthwhile exception…and no, it's not a keytar scarf.

Introducing the Improbable Projects Sonic Fabric Necktie, the world's first (and, we assume, only) neckwear made from actual cassette tapes, available now.

We understand if you're dubious—frankly, we never imagined wearing Walk Like an Egyptian. But these aren't piano key neckties: half recycled cassette tape, half old-fashioned thread, they're handwoven in Rhode Island to a textured, canvas-y sheen. So the only people who need to know that you're wearing an old Duran Duran album to their next reunion show are the enlightened souls you choose to whisper "My tie is hungry like the wolf" to at the merch stand.

While ordinarily you can't choose your tapes of choice, we have it on good authority that if you use your inside voice and pay a handsome fee, you can have the tie made from whatever tapes you want: the entire Wreckx-N-Effect catalog, a mixtape from your ex with hearts over the i's in the liner notes, or perhaps a pre-crazy Whitney and Bobby mash up.

There's even a way to listen to your finished ties, but that involves some serious ingenuity along with a tape deck, clothespin and some superglue.