A Locally Crafted Jacket with Ties to ’20s Paris 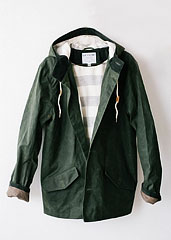 That’s a man who started making handmade raincoats in 1920s Paris, then his sons kept the business going until WWII.

First, consider how you instantly kind of want a raincoat from a ’20s Parisian man named Mr. Smutek.  Then, consider what Ketums looks like when you spell it backward.

Now you’re ready to hop online and get yourself a hooded jacket. One with waxed cotton from a Scottish mill that’s been kicking around since 1864, Japanese corduroy, gray flannel inside and a sleeve liner with bikes on it.

We could tell you why you might need a good jacket around here, or where you might go with it, but... yeah. Moving on.

Coming up soon, before fall probably, there’ll also be a jacket made out of soda bottles and then, later on, some flannel shirts and maybe a picnic blanket.

WineCab Is Like a Fancy Vending Machine for Wine

Serial 1 Is How Harley-Davidson Does E-Bikes

Style
7 New Things to Wear, Drink and Read
This Is the Want List

Style
The Cobblers Are Here to Save Your Shoes
New Mail-In Service Will Leave Your Favorite Sneakers, Boots and Leather Goods Looking Better Than Ever

Style
New Shoes, New Whiskey and a Blanket Shirt
This Is the Want List