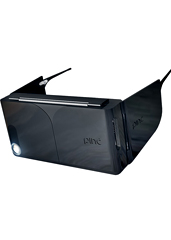 Almost started out with a thing about a rift in the space-time continuum.

Then we realized we don’t know anything about that.

Except that we hope it looks a lot like Pinć (pronounced “pinch,” of course), a case that turns your smartphone into virtual reality glasses and is controlled by flicking your fingers around, Minority Report–style. It’s now available for preorder.

Basically, this is a pair of goggles that make browsing the Web look really cool for the person wearing them. And a little insane to someone watching that person.

There are three pieces here:

1) The case, which holds your phone and unfolds into a wearable headset.

2) The optical control system, which is just some rings you wear on your pointer fingers so you can browse the Web without ever touching anything.

3) The app, which reconfigures your browser to look like you’re scrolling through infinite space. But an infinite space filled with, you know, emails and funny GIFs.

After you put the headset on, a virtual keyboard will appear. Then, you’re going to put your fingers in the air and type just like you usually type...

When you’re wearing a phone on your face.

Gear
This Smart Robot Will Do Your Chores
Yarbo Mows Lawns, Blows Leaves and Clears Snow

Gear
This Electric Catamaran Is Also a Camper
Use It on Land. Use It on Sea. Confuse Your Friends.

Gear
The Lumina Desk Has a Built-In Display and Wireless Charging
It's Also Adjustable, So Sit or Stand at Your Leisure

Gear
This New E-Bike Is Made From Plants
The Hummingbird Flax Is Ultralight, Foldable and Sustainable

Gear
It's a Jet Ski. It's a Yacht. It's Both.
The Vanquish VQ11 Is a Handsome Upgrade Over the Usual Watercraft