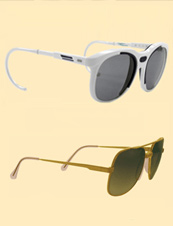 Ah, the '70s—a time when men were men, and athletes only took drugs to have fun.

The era's sporting gods looked a lot cooler, too. That's why you're still striving for McEnroe's effortless 'fro, Dr. J's gravity-defying headband, and Namath's charming way with the ladies. (Not their short-shorts, though—you have to draw the line somewhere.)

And now, this: Vintage Shades: Reggie and Bjorn, a jaw-droppingly awesome new line of retro sunglasses, patterned after those worn by the legendary Misters October and Borg.

Sure, your preferred form of tennis is ping-pong, and your preferred form of baseball is beer-league softball. But you've never been afraid of a little old-school swagger, and these new frames—dug up by the eyeglass experts at Silver Lining Vintage and re-released by the hipster sporting gear merchants at No Mas—deliver that in spades.

Start with the Reggie Bar, a deliciously square set of gold aviators, patterned after those worn by Jackson back when he was leading the Yankees to World Series glory. (He claimed he rocked them purely for style—allegedly, he had 20-15 vision.) If you're feeling a bit bolder, try the Bjorn Borg, a white plastic set just like the kind worn by the wooden-racketed wonder. It might not help your backhand, but it will give you a certain Swedish élan.

And you can't put a price on Swedish élan.

A Custom Living Pod for Self-Isolating in Style

1,000+ Free Fitness Classes You Can Stream at Home