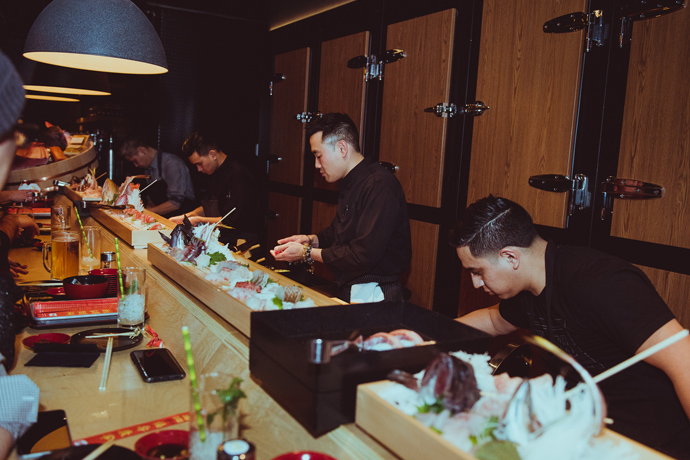 But have you ever wondered what would happen if you removed the noodles from that equation, then added a lot of delicious fatty tuna and the occasional cocktail served out of a La Croix can?

If not, you probably should. And you should know that its name is Sushi-San, a sashimi-focused spinoff that's now open in River North looking just like this.

Upon entering this lively spot, you'll be greeted by a sea of high-top tables. Which, nice, but the sushi counter is where you want to be. There, you can watch the master, chef Kaze Chan, have his way with some hamachi while listening to equally fresh beats.

Start with a Nigiri Bomb, which are more elegant than they sound. They're made up of bite-sized nests of otoro or tempura-fried nori filled with tako. Then, move into one of the sushi sets filled with a dazzling array of delicately sliced fish or an entire lobster tail charred over binchotan.

This may look like a serious sushi experience, until that La Croix-ing Tiger arrives. It's a shochu and lime cocktail served in a can of La Croix Pamplemousse. Finally, to end the evening on an equally playful note, some mandarin and lychee Emochi. That's an emoji-stamped mochi, of course.