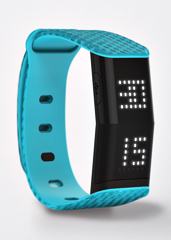 Now they made a thing that tracks your ping-pong stats.

The world is a many-splendored place.

Because the world now has Pulse Play, a new piece of wearable, racquet-sports-specific technology that’s a scorekeeper, an announcer and a bunch of other things all in one. It’s available for preorder now and ships this fall.

The guy behind this is three-time Grand Slam champion Andy Ram. Andy Ram has a name that’s the ’80s power ballad of names. But beyond that, he’s good at making devices that track your motions, keep score and talk to you. It works for tennis, badminton, squash and ping-pong.

So let’s assume you’re on board with this scenario. Splendid. When it arrives, slap it on your wrist and sync it with the corresponding app. Then, as you loft balls back and forth over nets of varying sizes, it’ll keep score in one of 50 voices like Seinfeld, Homer Simpson and Elvis for some reason.

When you’re done, use your stats to track your improvements over time. Or use the location feature to find future opponents.

Or just be done.

Gear
This Balmuda Speaker Sounds Like a Live Show
With 3D Sound and Ambient Lighting, It's the Next Best Thing to Attending a Live Performance

Gear
An Electric Bike That Rides On Top of Water
Where You're Going, You Don't Need Roads...

Gear
This Machine Lets You Make Vinyl Records At Home
And Your Legacy As a Musical God Begins...