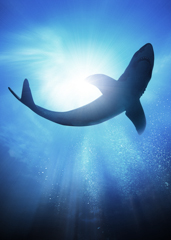 But occasionally, it isn’t.

Case in point: when a shark is approaching, the Jaws theme doesn’t play.

Well, good news: we’ve found the next best thing. For some reason...

Say hello to Shark Net, a Stanford-based iPhone app that tracks local great whites in case you want to go all Quint on some sharks, available now.

So it’s an app. That tracks sharks. Which probably ranks somewhere between Angry Birds and that app that turns your phone into a flashlight in terms of necessity. Meaning... you’ll totally use this all the time.

The service uses satellite tracking, acoustic tags and an honest-to-God surfing robot to locate sharks in near real time (give or take five minutes). You’ll see a constantly updated map of the coast with where the sharks are swimming—say, the Farallones, Tomales Bay or Año Nuevo—and a 3D image that’s true to each shark’s scars and characteristics. (Let’s just say they could all be nicknamed Scarface.)

What you’ll use it for: scouting the water before a morning surf at Ocean Beach. Pretending to be a marine biologist, Costanza-style. Or just, like, showing people sharks during your next meeting.

The sea was angry that day, my friends...

A New Horizontal Desk for Lying Down on the Job

Gear
A Sit-Down Segway for Zipping Around Town
Soon, Walking May Become Obsolete

Gear
A Smart Stash Box for Storing Your Weed
It Looks Like a Discreet Alarm Clock, but... It's Not

Gear
Hot Damn, This Is a Nice Coffee Grinder
Display It Prominently. Pass It Down to Your Heirs. Grind Some Coffee With It.

Gear
A Few of Francis Mallmann's Favorite Things
Raid This New Collection From the Legendary Chef and Best Made Co.