Finally, Some Theater on the Freeway 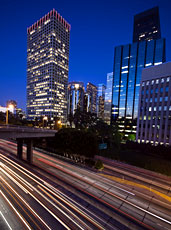 We all spend so much time on the traffic-choked freeways, each day inching closer to mania...

Sooner or later, things were bound to get weird.

And by weird we mean covert mobile theater, staged in the back of an inconspicuous truck... involving puppets. File this one under "Only in LA"—artist Joel Kyack's road play called Superclogger is now being staged during rush hour on our freeways.

Here's what happens—you're stuck on the 405, hungry for some excitement. You notice a white pickup truck up ahead, no more unusual than any other truck in the sea of brake lights. Or so it seems.

But once you get closer, you start seeing some motion in the back. Some melancholy performance. It's... puppets. They seem to be upset about their lack of control in this gridlock. (Even puppets hate traffic.)

And... there's a soundtrack. Just tune your radio to the frequency listed on the truck and you'll hear it. Suddenly, you're not just marking time, you're taking in some avant-garde theater. (It's like a drive-in, but with actual driving.)

And if you're really into mobile theater, you can even follow Superclogger on Twitter, thus enabling you to careen through traffic to chase this down.

But we don't recommend this.