Beer as Potent as Tequila 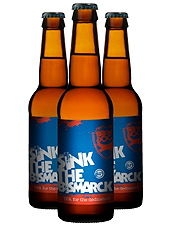 If the tournament has taught us anything, it's that the road to victory is long and grueling—filled with intense rivalries and fierce competition.

And whether you're the Murray State Racers or Scottish brewers who battled the Germans for the title of making the world's strongest beer, victory never tasted so sweet.

Behold BrewDog's Sink the Bismarck, a quadruple IPA out of Scotland that's been kettle hopped, dry hopped and then freeze hopped to become the world's newly crowned strongest beer to date—available for your tasting pleasure this weekend.

That's right: it's the booziest beer anyone on the planet has ever gotten their hands on. Clocking in at 41% alcohol by volume, it rivals a good tequila in terms of potency (though it doesn't quite make the cut with triple sec and lime juice).

As you can imagine, the process of boozing up a beer to this degree is a tad labor-intensive—but in cases like this, it's the payoff we're after. First it's double-barrel aged in the rich oak of Scottish whiskey casks. Then it's taken to an ice cream factory and frozen to minus 20 degrees Celsius (which might explain the hint of Rocky Road). Then it's frozen three more times, filtering out water to achieve the glorious 41%.

They only made 100 bottles of this monster ale, which means that Sunday's and Monday's BrewDog tastings are your only opportunities to drink it.

Which brings us to 99 bottles of beer...