Assembling the Most Dangerous Lineup of Fictional Ballplayers in Cinematic History

After an eventful off-season where we saw not one, but two of the largest contracts in MLB history—first for Manny Machado, then for Bryce Harper—baseball is finally in full swing. And while we can certainly appreciate the deliberate pace of our nation's storied pastime, we think we can all agree: baseball movies are much more exciting than regular season baseball games.

Baseball movies are, by nature, shorter, more efficient, more captivating and vastly more Kevin Costner-y (always a terrific thing) than even the most competitive regular season Yankees-Red Sox bout. Yet it is the games, not the movies, that are televised at a blistering rate, and the players, not our beloved story characters, who are shown rocketing long pop-ups on SportsCenter every night (we’re looking at you Aaron Judge).

All of which got us thinking: what if we could put together our own organization from the Hollywood players and coaches we know and love? What would the greatest baseball movie All-Star Team ever assembled look like?

Well, let’s build one and find out...

But first, some ground rules:

And that’s it. In the words of the beloved Hamilton Porter...

A thing you come to realize putting together an imaginary team of cinematic baseball players: there is an extraordinarily deep and talented pool of pitchers available. That's no coincidence—pitchers, with their outsized personalities and role on the team, often make for more dynamic characters—but as a result, the decision as to who would get the starting nod was a difficult one.

I’m rolling the dice with Rowengartner, however, because of his ceiling. There’s simply nobody on earth touching his fastball when it’s on. And if for whatever reason he’s off—say, if his arm spontaneously loses its mysterious ability to throw triple-digit gas—we can go straight to a stacked bullpen of trusty alternatives (more on that later).

To aforementioned Porter (The Sandlot): I am so, so sorry. But enlisting a seasoned veteran at catcher is especially crucial when you’ve got another 12-year old boner starting on the hump. If Crash can shape and mold a guy named Ebby Calvin “Nuke” LaLoosh into a major-league pitcher, I feel more than confident throwing him in a battery with Rowengartner.

Plus: it's always good to have a guy on your team capable of delivering polemics on the novels of Susan Sontag and baptized by the unofficial Eros of baseball. He's an intellectual leader but also a spiritual guide, both of which are key. 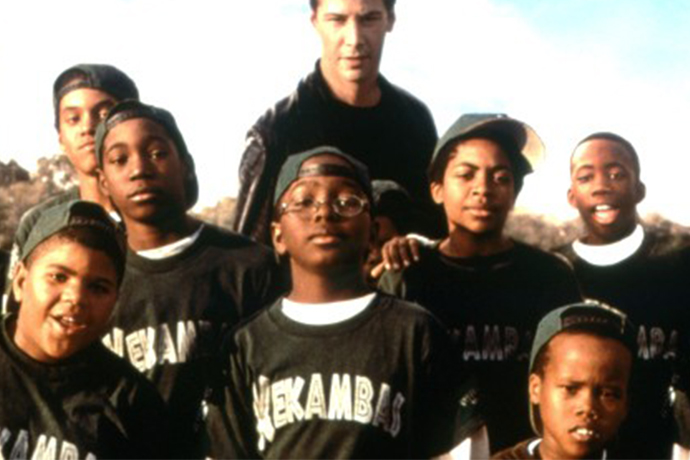 Despite his pitfalls (he quits the team not 20 minutes into the movie before staging a graceful comeback) Kofi Evans is by far the most versatile, athletic position player the Kekambas have to offer. Which allows us to slide him over to first to make room for a couple of more-than-qualified middle infielders (because I am the Joe Maddon of subjectively drawing up meaningless baseball lineups). You can also currently purchase his Kekambas away jersey online for $40, which I recommend you go do immediately.

2B - Marla Hooch, A League of Their Own

Marla Hooch’s first round of switch-hitting BP was so impressive that someone felt the need to upload a YouTube video of each of her frozen ropes spliced with other various movie scenes of people being hit in the head by flying objects. Think about that.

3B - Doris Murphy, A League of Their Own

It’s a strange feeling loading this lineup with A League of Their Own stars without a trace of Dottie Hinson behind the plate. But again, some players simply fall victim to a case of a stacked position. That, and Rosie O’Donnell’s free-wheeling Doris could 100% mash with a bat as thick as her New York accent.

A few things Benny Rodriguez was able to accomplish within the span of a 101 minute film:

Benny “The Jet” is to the cinematic baseball universe what Derek Jeter is to the city of New York—just minus all the sex baskets. I’m popping him into the heart of our team’s infield for this very reason.

While Benny remains the most accomplished player from The Sandlot, it would be a pitiful nuisance not to recognize Mr. Mertle as the most decorated. Mertle shared the field with the movie’s central mythical figure—even touting himself the superior hitter to one “George” Ruth until a high and tight fastball left him blind and out of a job.

With the exception of Rodriguez, Evans and (maybe) Mertle, you’ll notice our current squad is a little lacking in speed. To shore up our defense and baserunning, we’re going with Hayes—a man who leapt out of bed and sprinted a 40 in his PJs faster than two of his teammates—in centerfield and potentially at the leadoff spot. It’s also worth mentioning that by the end of Major League, Hayes is arguably the most valuable five-tool player on the Indians roster.

Roy Hobbs, played by the legendary Robert Redford, escapes death twice—once at the hands of deranged serial killer, another at the hands of a pastry—in a movie many call the greatest sports film of all time (it’s neck and neck with Bull Durham in my book).

Anyone who can strike out the Babe at 19 and rake a light-blasting homer with his gut bleeding at age 35 seems like a fine candidate to round out a roster of talented greenhorns.

Manager - Jimmy Dugan, A League of Their Own

There’s really an astounding group of cinematic managers to choose from here, all of whom I’m certain could handle the ramshackle collection of talent above. But at the end of the day, give me the coach who’s willing to call the home plate umpire a “penis with a little hat on” before pleading his case for a common misunderstanding. That’s the Tom Hanks I want running a ball club.

The actual roster of players in Angels In the Outfield is quite lousy and unreliable. That's why they needed actual, tangible help from flying invisible angels. Roger and Coach Knox, on the other hand… well, let’s just say I am fully on board with this absolute sell-job pulled on soon-to-be-diseased pitcher Mel Clark.

Billy Chapel, For the Love of the Game
I’m having a Costnergasm© thinking about Billy Chapel throwing to Crash Davis for nine innings.

Kenny DeNunez, The Sandlot
Crafty, excellent heater, lived up to the Sandlot hype by making it to the minors.

Rick “Wild Thing” Vaughn, Major League
Flared out harder than the cocaine smoking sex addict who played him, but man, Rick could throw some steam.

“Nuke” LaLoosh, Bull Durham
Sure, why not.

A slightly different version of this article ran on July 25, 2018.