Baseball Is the Slowest, Greatest Game on Earth

If You Want Baseball to Be Faster, You’re Missing the Point 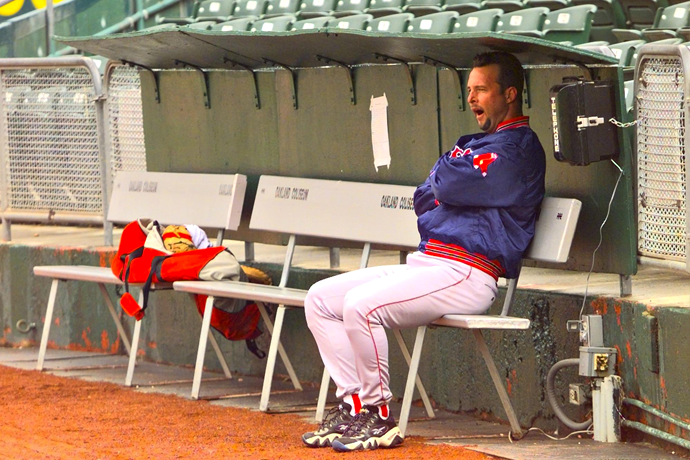 Everyone keeps talking shit about baseball.

The very point of the game seems to be humming right past them like a Kershaw curveball. These instant-gratification addicts are even leading to gross infringements on our North American pastime. Looking at you, new rule allowing batters to take first base at the mere suggestion of an intentional walk.

But baseball should be slow. Remember how you were recently telling your friend/boss/parent how “crazy busy” you are and that book by that lady you bought about slowing down to the speed of life or whatever? Well, hell, baseball’ll cure what ails you.

It’s slow as a stoned sloth in the Deep South, and that’s just the way I like it. Here’s why. Complete with lots of bad metaphors comparing baseball to things that are inherently more interesting than watching a baseball game.

If football is Michael Bay, baseball is Alfred Hitchcock.
There is no telling what can happen at any second. The entire fucking thing should be fraught with slow-burning tension, the erratic explosions of action mere icing on a cake of white knuckles. The looming threat of a stolen base. A depleted batter with a full count and bases full. A ninth-inning grand slam tailing 53 foul tips. It’s chess. Until it’s war.

Beer.
If golf is a good walk spoiled, baseball is a summer day’s drinking session that just happens to come with variably athletic menfolk swatting a tiny ball with a huge stick. That doesn’t make for a great proverb. Point is, beer and baseball go together like rama lama lama ka dinga da dinga dong. So kick back. If you can’t savor the game, savor the beer. It has a magical ability to make leisurely things exciting.

Instant gratification is overrated.
Many measures have been taken through the years to make baseball quicker.

Since Major League Baseball’s formation, the outfield wall has been moved in to promote homers. Steroid abusers have been crowned record holders. Right now, they’re letting batters grab first base at the mere intimation of a walk, without actually having to be properly walked.

These shortcuts debase tradition and are a cheap ploy to pack stadiums full of the kind of people who think techno makes a great baseline soundtrack for everything. Next they’re going to want to speed up foreplay.

Enjoy a sound mind-fucking.
Baseball is weird. Most sports have a horizontal playing field. The players run one way with a ball. Then they run the other way with the ball. Trying desperately to place said ball in some cavity where no ball previously existed.

But baseball throws a lot of variables your way. It’s a thinking person’s game that gives you a lot of time to think. There’s the diamond-shaped field. The infinite stats baseball nuts will rattle off. Maybe a right-handed pitcher has to face a left-handed batter and everybody’s best-laid plans suddenly go to hell. Sometimes a guy eats chicken every day and can’t get chicken and loses his cool at the plate. Sometimes you find yourself rocking out to really bad organ music and yelling “Charge” with other people and doing the wave for no reason. Baseball is weird. But fun weird. Mellow out and just play with the beach ball.

To wit, Babe Ruth drank a shit ton and downed hot dogs like they were made of creatine. He is considered one of the sport’s greatest players. The world champion ’86 Mets did so much blow that it’s still hard to find good cocaine in Queens. Dock Ellis claims he pitched a no-hitter while tripping balls on LSD. And Fernando Valenzuela was portly and blew away batters all day.

Catch my drift? Ballplayers are not always Olympians, but oft-relatable everymen who sometimes have cool physical limitations and odd personality disorders. But unlike your Kobes of the world, they inevitably do have to be members of a team.

Baseball needs to take its time. Don’t rush it.
A lion stalks an antelope in the savanna. For a second, their eyes meet. The antelope knows he’s done. The lion knows he has conquered.

That’s baseball. Sometimes the batter is the lion, sometimes he’s lunch. It’s a simple contest of mano a mano with a small rock and a big stick. And there’s beauty in simplicity. You can’t rush the natural order of things, and baseball is the ultimate human embrace of this notion.

Also, you get to say stupid-dumb Zen shit like this when talking about baseball. How could you not love that?

Everyone who doesn’t like baseball can go fuck themselves.
One of my closest friends is from Argentina. He says baseball is a “game,” not a sport. As far as I know, he has never had a really hard, 100-mile-per-hour ball thrown at his head by a rival.

And dude likes soccer. He even calls it futbol. I’ve watched that a few times, and not only are the scores tinier than in a baseball game, everyone goes home 100% happy when it’s a tie.