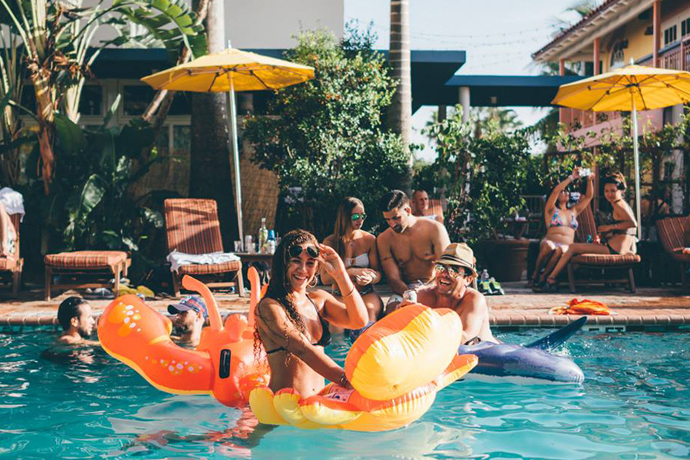 Somehow, Miami manages to have one weekend a year that has more bikinis than usual.

Ah yes, the triumphant return of Swim Week is upon us.

If You're Into Charity Events
And if looking at beautiful humans wearing Eberjey and Onia on the runway under the Miami sky in the Setai courtyard helps the kids from Style Saves, then go do your part. The open bar also helps tremendously. June 13, 9pm-midnight, $100, Style Saves at Setai, tickets here

If You're Into Long Walks on the Runway
You'll go to Nautilus for Stone Fox Swim's first runway show, which just happens to be down the bamboo tunnel. Stay for the rum, the DJ and the models. Always the models. June 14, 4-6pm, no cover, Stone Fox Swim at Nautilus, RSVP here

If You're Into After-Parties
What do bikini models do after the runway? They head to Rockwell, apparently, for the Bunch of Babes after-party with brands like Lolli Swim, Beach Riot and Show Me Your Mumu. Expect DJs (weird), drinks of all varieties and people wearing swimwear long after the sun goes down. June 14, 11:30pm-5am, $40 (at door), Rockwell

If You're Into Mimosas and Sleepwear
Eating in your PJs on the last day of Swim Week sounds about right, which is why hitting up the Wildfox Pajama Brunch at Leynia is a good idea. The bloodys, mimosas and grilled meats aren't bad ideas, either. June 15, 11:30am-1:30pm, Leynia at Delano, RSVP here

If You're Into Barbecues
Wind down at the Standard's Lazy Sunday BBQ. A lazy Sunday barbecue of the Vietnamese variety with Asian-inspired food and drinks. The DJs may also inspire you to do some dancing on the deck, or around the pool, or both. Go for it. You only have until sunset. June 15, 2-7pm, no cover, The Standard, RSVP here

If You're Still Into Barbecues
Hit up Broken Shaker's, where you can partake in burgers, gratis punch from Racket from 2-3pm and a local surf shop selling things that make sense during Swim Week. All around the pool, of course. June 15, 2-7pm, no cover, Swim Week Surf's Up BBQ at Broken Shaker at Freehand

Leisure
Here's What You Can Expect From the New Conrad Fort Lauderdale Beach Hotel
Hint: It's a Lot