Checking in on the Hype at Bar Crenn

Because If Anything Deserves a Closer Look, It's Dominique Crenn's New Wine Bar 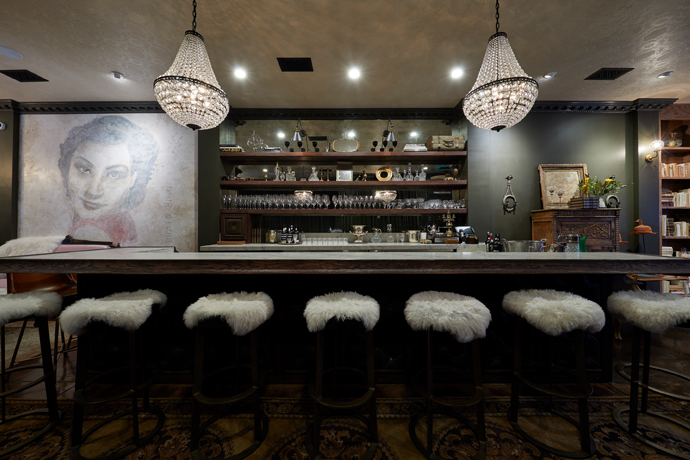 But for good measure, it's the newest endeavor from superstar chef Dominique Crenn that's equal parts Parisian salon and her living room. Most importantly, yes, it's a wine bar. One that's been open for a bit now looking just like this.

So we decided it was high time to put on some pants that weren't jeans, pop in and see if it's living up to the hype.

The Hype: The vibe is akin to the chef's living room.
The Reality: If her living room is that one room in your parents' house where no one is actually allowed to go in and speaking above a whisper feels like it's against a list of unwritten rules, than... yes.

The Hype: The décor is reminiscent of a 1930's French salon.
The Reality: Having never been to a French salon in the 1930's, we can't quite say for sure. But it is a lush, cozy atmosphere with fur everywhere. It's mostly low seating with low tables, too, so if you're tall, be prepared to not know what to do with your legs.

The Hype: The menu of French delicacies is an homage to the best chefs in the world.
The Reality: With recipes donated by chefs (named on the menu), everything is truly, basically without flaw, from Guy Savoy's Ice Poached Oysters with gelée and New Zealand spinach to Dominique Crenn's Brioche with whipped Wagyu beef fat. Yes, when you're a two-Michelin-starred chef, you get to be on your own menu of the world's bests.

The Hype: They have the best deviled eggs you've ever had in your life.
The Reality: Believe the hype. Especially the hype about the Dungeness Crab one.

The Hype: The wine menu is extensive and impressive.
The Reality: Also true. And luckily, the staff are all well versed in it, so if you're a bit intimidated, they'll know the best pairings. Pro tip: try the impossibly versatile white blend of Grenache and Claret.

The Hype: You're not leaving without dropping some serious cash.
The Reality: Everything's certainly reasonable given the quality of what you're getting. Still, maybe file this one under special occasion. Even if that occasion happens to be a day ending in "y."

The Hype: The Caneles de Bordeaux are life-changing.
The Reality: These little French pastries with rum and vanilla that are crunchy on the outside and soft on the inside may very well be proof of a higher power.