Who Is the Best Movie Dog of All-Time?

An Important Question to Consider, Before Seeing Wes Anderson's Isle of Dogs

In a dystopian future Japan, a corrupt mayor sends all the city dogs to be quarantined on "Trash Island." A 12-year-old boy, Atari, takes matters into his own hands and sets off to find and rescue his dog, Spots, enlisting the help of a ragtag crew of talking canines on the island. It's your timeless boy-finds-lost-dog story, with an Andersonian twist.

With the likes of Bill Murray, Bryan Cranston, Jeff Goldblum and Scarlett Johansson lending their voices to pups, it's quite feasible that these dogs will charm the socks off you. Which got us thinking: Anderson's new canines not included, who is the best movie dog of all-time?

The answers from our staff are below. And to nudge people in the right direction, we asked them to consider the following questions:

3) Did the dog ever bite any bad guys?

Kady Ruth Ashcraft: Bruiser Woods, from the Legally Blonde series
The best movie dog is a gay Gemini vegetarian and his name is Bruiser Woods. A faithful companion to legal rockstar Elle Woods in the Legally Blonde series, Bruiser (real name: Moonie) redefined the gay best friend stereotype by being, you guessed it, a dog. His sidekick role was understated in the first film but took a more central place in the sequel's narrative when Elle works to pass Bruiser's Bill to fight animal testing. As you surely remember, it was discovered that Bruiser's mother, a Bostonian Chihuahua, was cruelly subjected to animal testing. Bruiser was fashionable, mysterious, and most importantly, loyal. He and his partner, Leslie, were both very good boys.

Hadley Tomicki: Nanook, from The Lost Boys
Nanook is a beautiful Alaskan Marmute. His coat is beautiful and shiny. Nanook is playful and friendly and loves his owner, Corey Haim. However, Nanook does not like vampires. Hates them, even. And when vampires come around, even not-so-bad, just transitioning ones like Corey Haim's brother, Michael, he will bite them. When really bad vampires come around, like that no-good, mesh-shirted hair rocker-vampire Paul, Nanook will do super dope stuff like jump out of nowhere and push him into a bath of holy water steeped with garlic, thus turning the fight in Santa Carla's decades-long fight against the undead.

Hannah Kim: Fang, the Harry Potter series
Fang (IRL) is a Neapolitan Mastiff, an ancient breed that's best known to be a "defender" with their strong appearance. Ironically, "he's a bloody coward".

Can you count on him to protect you from all the different forms of Voldemort? Probably not. Will he defend you from the spiders in the Forbidden Forest? Hell no. But, the pup's been besties with Hagrid for years and all-in-all he's pretty adorable. That's gotta count for something. So, if incessant drooling dogs with droopy faces are your thing, Fang wins first prize.

Lea Weatherby: Otis, from The Adventures of Milo and Otis
The original gentleman and compatriot to all genders and species. Otis is the dog every man wants to be and the man every woman wants at her side whilst giving natural, unassisted childbirth inside of a damp cave.

Najib Benouar: Hercules, from The Sandlot
I hope Otis went on to have a long and fulfilling career as the world's first and only canine doula...

Hercules from The Sandlot deserves a shoutout. Was he a good boy? Yes and no (if you count chewing on the baseballs that those damn kids carelessly knocked over the fence and barking at them when they'd poke things through the fence or fabricate stories of an alleged violent past).

Was he a very good boy? Yes, as it turns out, he was the sweet loyal companion to blind James Earl Jones. And a solid backup utility infielder. He was (unfairly) cast as the junkyard villain, but he took that one-note role and imbued it with depth, nuance and, in the end, slobbery kisses. A real character actor's character actor...dog.

Kelly Larson: Puffy, from There’s Something About Mary
If for no other reason than her Herculean tolerance for pain, There’s Something About Mary’s Puffy definitely deserves some love. Very few Border Terriers can pull off a full-body cast the way she can, and her fistfight with Ben Stiller is a true testament to her loyalty. For those reasons, I’m awarding her five out of five nose boops.

Cait Munro: Jackal, the stoner dog from Dude, Where's My Car?
It’s not every day that you encounter a canine who not only partakes, but can actually smoke out of a wooden pipe, and that’s why Jackal is so awesome. “Dude, your dog’s a stoner,” a baby-faced Ashton Kutcher tells Jackal’s owner, the equally tripped-out Nelson. “Pretty much all he does is lie around and smoke his pipe,” Nelson replies. Which, to be honest, is probably all I would do if I were an animal with access to that heady herb. Is Jackal the quintessential “good boy”? Not quite—he won’t protect your home from intruders or play fetch with you, largely because he’s too baked to stand up. Is the whole premise of his character a glaring animal rights violation? Probably. But if I had to pick a canine to kick it with, Jackal would be my dude, hands down.

Based on the given criteria, the best movie dog in the history of movie dogs has to be Betsy the High Heel Wearing Dog from 1999’s Bowfinger:

Is she a good dog?
The above clip is a crucial scene in Bowfinger, which is a movie about the making of another secret movie wherein its star (Kit Ramsey, played by Eddie Murphy) has zero idea he is being filmed for said movie. So it’s important that you understand the stakes are high here. One false move on Betsy’s part and the entire movie goes down. But Betsy never falters, never wavers, never misses a beat following her director’s orders—all in the most gorgeous pair of heels you’ve ever seen. She is the most obedient, stylish, very good dog I have ever witnessed in a feature film.

How cute is she?
Considering it’s a dog walking in high heels I’m pretty sure we can score this one a 10 out of 10.

Does she bite bad guys?
Well, no. But she does attend movie premieres with absolute juice (and, again, in heels). 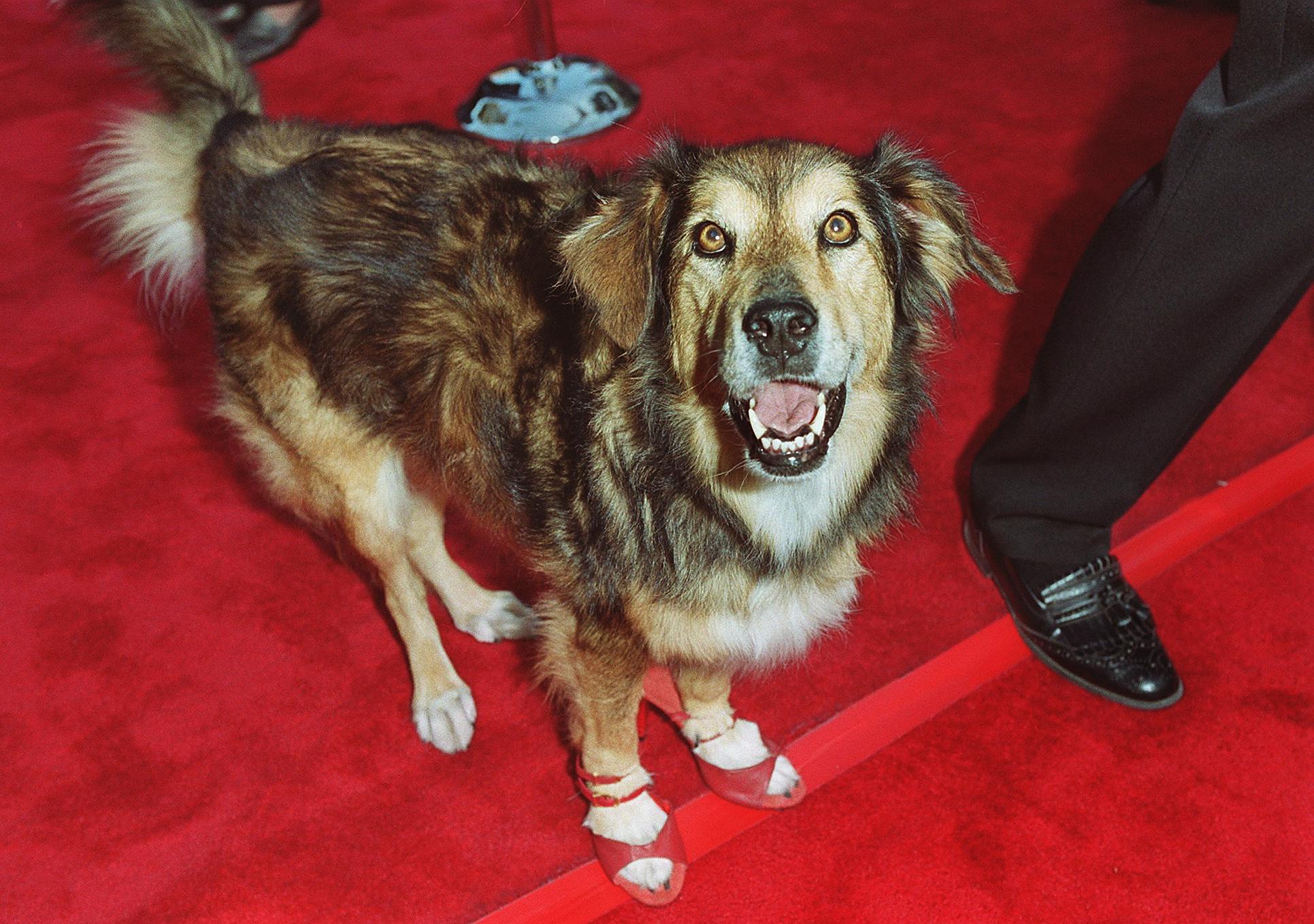 So I think we can use any red carpet bonus points here to cover a low score in animal violence.

Sam Eichner: Toto, from The Wizard of Oz
I notice we've eschewed some of the classic movie dogs, from Beethoven, to the Best in Show gang, to Air Bud (basketball Air Bud, not baseball or football Air Bud, because there has to be a limit to a golden retriever's athleticism), in favor of some deeper cuts. I'm a fan of that. But I think it's time we give credit where credit is due, to the OG movie dog, Toto "The Witch Is Dead" [err, whatever Dorothy's last name is] from The Wizard of Oz.

Let's get one thing straight: Dorothy would never have made it home without Toto, the ur-purse dog. After being captured by winged monkeys, Toto leads the Tin Man, the Scarecrow and the Cowardly Lion to the castle to free Dorothy from the Wicked Witch of the West. When they finally make it to the Emerald City, Toto pulls back a curtain to reveal the Wizard for who he really is: a humbug!

After which, the Wizard awards the Scarecrow a diploma, the Lion a medal and the Tin Man a heart-shaped clock. But what does Toto get?!?! Nada. Nothing. Toto saved Dorothy from a frickin' evil witch and helped expose a great and powerful wizard as a fraud, and nobody could spare so much as a belly rub. For shame!

Yet greater than Toto's heroic acts, or his superior instincts to bite the shit out of Miss Gulch, aka the Dustbowl Grinch's leg, is the legacy he left behind as a canine actor. Here is a two-minute True Hollywood Story-esque YouTube video about Terry, the dog who played Toto. I implore you to watch it in full.

As it happens, Toto was played by Terry, who "had to work hard to overcome a painful shyness" to play the role that would make him a household name. Following the success of The Wizard of Oz, Terry transformed "from rural ragamuffin to snooty society pet" in 1939's The Women, and reunited with an old cast mate for 1942's Tortilla Flat. But here's the rub: Terry had by this time been rechristened Toto. And Terry was a female dog. That's right: Terry went so deep method for the role of Toto that she played a different sex and never broke character, not even while playing other parts.

Toto is the Daniel Day-Lewis of canines.