Truffled Terrine and Vermouth Cocktails Next to Schubas

Dinner and a Show at Schubas Just Got a Serious Upgrade 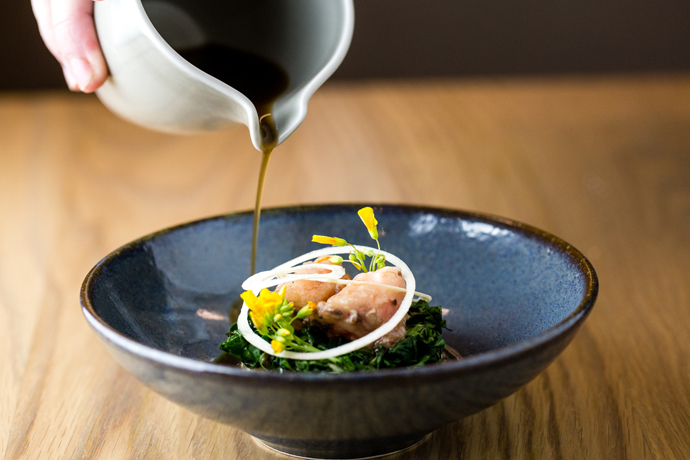 Schubas Tavern is that one place where you saw that one indie-rock band 10 years ago.

Everyone has a Schubas story.

But now, you can have a Schubas and beeswax-aged mackerel story.

You're not in Kansas anymore. You're in Tied House, the perfectly chic restaurant that just dropped itself next to the historic music venue looking a little something like this.

Welcome to two stories of marble bars, caramel-leather banquettes and copper accents. All of which are revealed after you make your grand entrance through a long, teal hallway. It's surprisingly modern compared to its neighbor, but you'll notice some similarities, including that teal wall color and some oversized tin ceiling tiles.

The food isn't half bad-looking either, as you'll note upon the arrival of those Maitake mushrooms swimming in leek broth. Or maybe you're more of a raviolo fan. Theirs are filled with duck and sprinkled with sesame seeds. But the headliner has to be the Berkshire pork terrine, with truffles, of course.

Cue the subtle sound of bass reverberating from next door and a round of Fours, a cognac and calvados cocktail with a hint of cinnamon. Or maybe the Two, which is made with pisco and vermouth. You get how cocktails work here.

Then again, you could always skip the nightcap and slip out through the side door that leads into Schubas.

You know what to do from there.