Brought to You by the King of Saudi Arabia's Former Cook 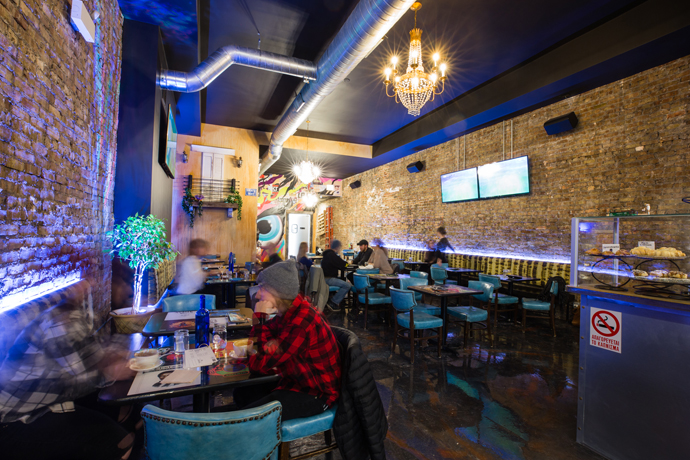 A Greek DJ and a former cook for the king of Saudi Arabia walk into a bar.

But instead of a punchline, you're left with Six06 Cafe and Bar, a new West Town spot housing those very people who would like nothing more than to ply your senses with music and deliciousness. It's open now and here's the slideshow.

It's a modest affair. Aside from the DJ booth, gumball machine fish tanks, crystal chandeliers and the giant eye mural that stares you down when you're just trying to eat some loukoumades, that is.

Right. So it's not modest at all, but it does have some comforting exposed brick walls and a stainless steel coffee bar where you can grab a Greek coffee and escape the madness.

Or you can stay a while and casually work your way through the decidedly Greek menu. Tsoureki French toast. Honey-drizzled saganaki. Sizzling skewers of pork served with fresh pita and Greek fries. All there. All waiting for you and your people.

And since they've taken the liberty of bringing in some Zeos pilsner straight from Argos, so is that. The subtle-yet-still-definitely-house-music will make you crave a drink. Try the Santorini @ Eight, an ouzo cocktail with Meraxa and pomegranate. And come summer, you'll be drinking those on the rooftop patio.