Tom Hanks Has Been Cast In His Kindest Role To Date

As The World's Friendliest Neighbor 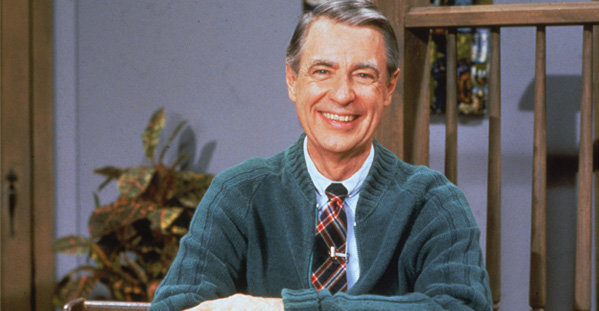 Is there such thing as a kindness overload? If so, we’re in danger. Seek shelter. Tom Hanks has been cast as Mister Rogers in the upcoming film about the children’s show host, You Are My Friend. That’s right. And to make it even more sweeter Marielle Heller, director of Diary Of A Teenage Girl, is set to direct.

Take a moment to bask in this feeling. It’s called “peace” and it’s very rare these days. The nation’s kind uncle will embody the spirit of nation’s nicest neighbor. Dare I say we are living in good times. Imagine, if you can, Hanks slipping on his loafers and gently dressing himself in that classic red cardigan. This is better than yoga.

Why not bask in this delight a little longer. The movie is based on Mister Roger’s relationship with Esquire journalist Tom Junod who wrote a now famous profile on him for the magazine in 1998. Here's a particularly beautiful quote from that piece:

"The connections we make in the course of a life—maybe that's what heaven is […] We make so many connections here on earth. Look at us—I've just met you, but I'm investing in who you are and who you will be, and I can't help it."

This news feels like a bath drawn at the perfect temperature, like freshly washed sheets tucked in exactly right. I’m going to sit in this news for a little while because everything else is a heaping garbage fire. Not even Mr. McFeely the delivery man could deliver news of this kind.

The president of Tristar Pictures said of they hope the film is able to “remind us all of the transformative power of kindness and respect to heal and to unite.” I’m not tearing up you’re tearing up. But either way, here’s a tissue. That’s the Mister Rogers way.