With Gorgonzola-Stuffed Dates and Lots of Lambrusco 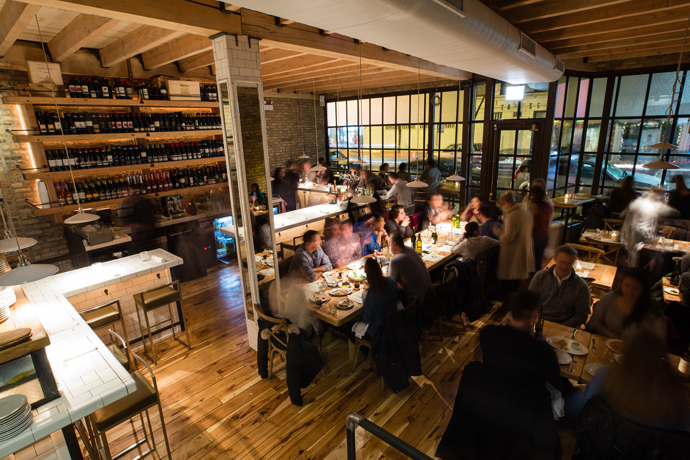 The cozy New York City trattoria. There's nothing like it.

Well, nothing like it in Chicago, at least. Lots of 300-seat showstoppers and corner burger bars, sure. But those... not so much.

And it's not that you don't like burgers or anything, but you also like mushroom bruschetta and glasses of Lambrusco. So here's Lago Wine Bar, now open in Lakeview from the team behind the West Village's Aria Wine Bar. Take a look around.

Steps away from the Belmont Red Line station and behind a wall of frosted glass windows is where you'll find your next date-night spot. A spot that'll have you drinking classic cocktails at a subway-tiled bar and then splitting a plate of linguine under exposed rafters.

Like its New York City sister, it takes a classic approach to the Italian feast. It starts with an array of cichetti, suckling pig crostini and Gorgonzola-stuffed dates, followed by black truffle mac and cheese or maybe a Grana Padano-topped filet.

None of which would be worth anything without a bottle of Tuscan Chianti (yes it would, but still). And they do Italian wines by the small glass here, too, so you can try the Sicilian Chardonnay. Then try something else. Just keep trying things and see where the night goes.

This seems like a good time to reiterate that it's steps from the Red Line.