This Old Pool Hall Is Now a New Pool Hall

With Naan Pizza and Billiards Racks Full of Shots 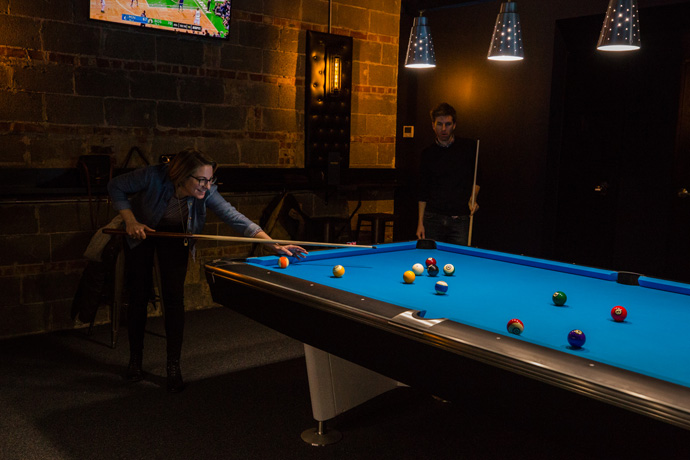 1970: Marie's Golden Cue comes into existence with that oh-so-classy and timeless saying, "We have smooth shafts and clean balls."

Today: Those well-worn green tables have been replaced with shiny blue ones and a few other notable upgrades have been made that we'll go ahead and tell you about now...

Yes, it's still a pool hall. Yes, it still has that iconic yellow sign. But now that sign reads Surge Coffee Bar & Billiard. It's currently open in Albany Park and here's the slideshow.

The team behind Pressure Billiards kept a few nods to its former life. A communal table is adorned with rails from the old pool tables, as are the banquettes. There's a central bar made from reclaimed wood where, during the day, you'll be ordering shots of espresso and, at night, shots of liquor served in a mini billiards rack.

Past the bar, you'll enter a sea of blue pool tables illuminated by vintage light fixtures. 14 of them, to be exact, which you can have your way with for $13 an hour. But for now, you'll be on a liquid diet of salted cucumber Gimlets and cranberry daiquiris between games of eight ball.

In a few weeks, you'll be able to snack on chicken wings and naan pizza while watching the NCAA playoffs, conveniently shown on screens surrounding the tables.

And the townspeople rejoiced.