The Vexing Opacity of The New Yorker's Post-Charlottesville Cover

In Times Like These, Maybe We Need the Clarity of Time Magazine

It’s easy to underestimate the quiet power of the magazine cover in the wake of an incomprehensible act of terror. While the deluge of reportage, commentary and even tweets scramble to articulate our grief, words often fail to encapsulate the full range of emotional and political ramifications incited by something like Charlottesville. Magazine covers, on the other hand, have the dual ability to both summate and clarify; in the aftermath of a tragedy, seeing so forthrightly what you’re feeling or thinking pasted on front of a major periodical enacts a grounding sensation of solidarity between you and a million other people seeing and feeling/thinking the same thing. They become instant icons of the just-passed past, a sort of visual token of the memory of an event that can feel so big as to be rendered inaccessible.

To that end, I found myself incredibly moved today by this week’s Time cover, substantially less so by the cover of this week’s New Yorker. While the Time cover summarized the situation in no uncertain terms, by jarringly equating America with Nazism, the New Yorker cover was almost counterintuitively vague: it takes a moment to realize the sail is a Klan mask, and even when you do, it takes another cognitive leap to really get at what the artist was going for. I actually kind of missed the point altogether, until I read the artist’s intentions, and saw that this immovable sailboat served as a visual metaphor for Trump’s “weak pushback” against the hate groups who terrorized the streets of Charlottesville on Saturday. It's the typical philosophical approach for New Yorker cover art, but it felt like the wrong one for this. 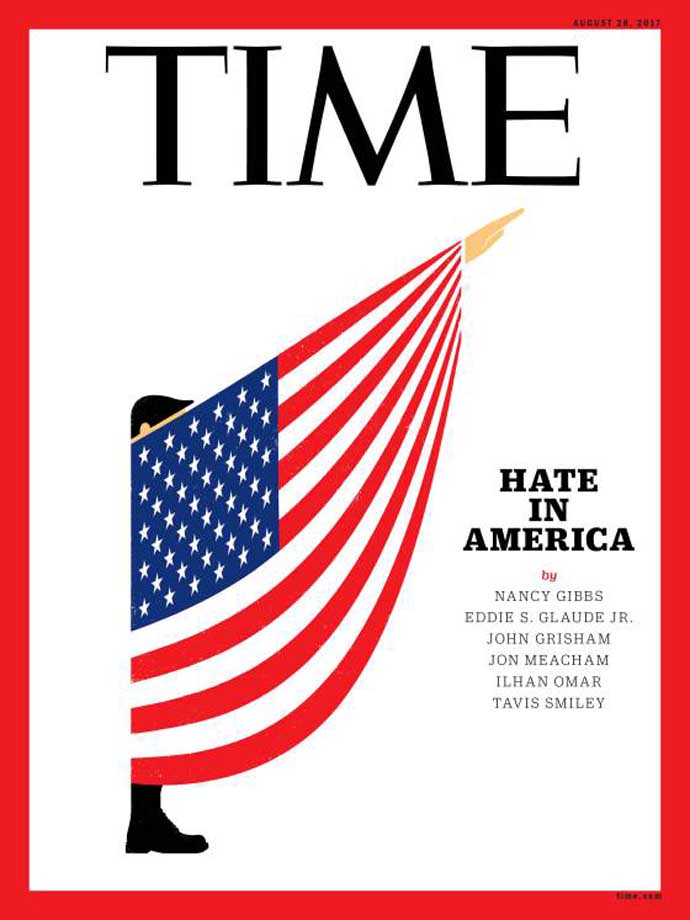 Now, don’t get me wrong: I love The New Yorker. I read it daily. And it’s to the New Yorker’s writers I look to make sense of news big and small—a movie I was ambivalent about, reactions to Trump’s latest remarks, whatever. But something about this latest cover irked me. They responded with clever opacity to an event that required, in their own (and many others’) opinion, the utmost clarity: a recognition and condemnation of the virulent racism and neo-Nazism on display at Charlottesville. They abstracted an evil that feeds on abstraction. And while I don’t harbor any of the vitriol Leah Finnegan, writing for The Outline, does towards New Yorker covers—which seem like a strange, contrarian-for-contrarian’s sake target—she makes a solid point: “There’s a distinct line between editorial art that is provocative and editorial art that is incoherent.” The New Yorker, in this case, seemed to me to fall on the wrong side of that line.

Of course, there’s a time and place for their brand of cover art. Humor is an important tool in the arsenal of those rebelling against or checking power, and always will be. But when I think forward to what I’ll think back on after Charlottesville, it won’t be a cartoon Trump on a sailboat. It will more likely be a horrifying drawing of an American flag, draped on a silhouette of a man giving a Nazi salute.