And It Brought Deep Fried Spaghetti Balls, Too 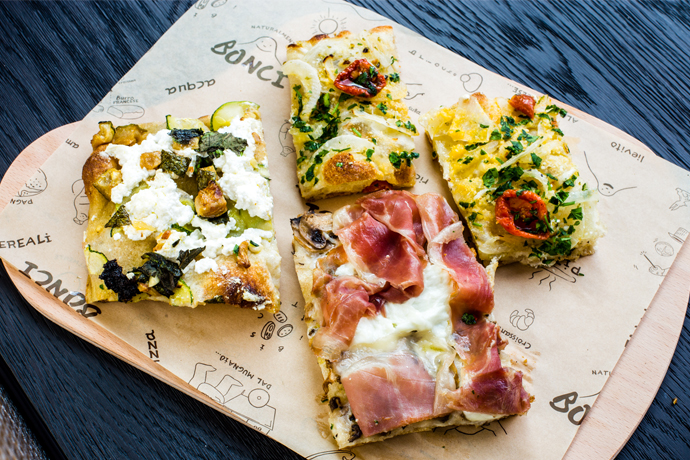 13 Photos Bonci Pizzeria
You may notice a newly formed line creeping towards Randolph.

It's for pizza. Not just any pizza, but the best damn pizza Rome has to offer. It's Bonci, the namesake pie house of Gabriele Bonci that's now open in the West Loop and looks like this.

Once you make it through said line, you'll find yourself face-to-face with a pizza case filled with over a dozen different square pies. There's an open kitchen that lets you see the dough masters in action, and there are a handful of counter seats that offer similar views.

They employ a 100-year-old sourdough starter that eventually morphs into a focaccia-style crust. Then they top it with one of 1,500 topping combinations, from fish roe to prosciutto. Finally, they cut it with their signature giant scissors, weigh it, heat it and place that piece of perfection in your hands.

If you don't want pizza, maybe go somewhere else. Or maybe opt for some suppli instead. They're Roman-style, deep fried rice or pasta balls stuffed with meat and cheese, and they pair nicely with a glass of canned rosé or a split of prosecco.

Then again, so does pizza.