Is Sansa Stark About to Die?

Inverse, Business Insider
An original three-page outline George R.R. Martin wrote for Game of Thrones back in 1993 is currently making the internet rounds as the final two-part season reaches its halfway point. The letter, which reveals some significant character and plot ideology, originally surfaced back in 2015 by way of Twitter and Reddit, but that was back in days of Season 5 lore. Now that a few seasons have past with a slew of central characters surviving and dying off, what was once a young subject of conjecture has now grown some roots. (I’m sure I don’t have to say this by now but possible SPOILER ALERT.  GET THE HELL OUT OF HERE IF YOU PREFER TO LIVE RECKLESSLY.)

While much of what Martin plotted out in the pitch letter has certainly changed since 1993 (for one, he ended up writing five books, not three), one paragraph sticks out: the one highlighting which central characters will survive until the very end.

Look at those beautiful five names one more time and gently proceed to lower your right raised fist back down to your office desk. For one, who knows if any of this will hold true? A ton of other details from the letter (like an Arya-Jon love affair? Pass…) have unfolded to being nothing at all. And while it's comforting to know the survival of some of our most beloved heroes is intricately tied to the show’s plotline, this certainly does not bode well for… any other main character!

How does Sansa feel about this? Or Jaime and Cersei? Or Citadel dropout Samwell Tarly? Luckily, we discovered a few emails that might shed a little light into how some of these big time players are feeling right now. 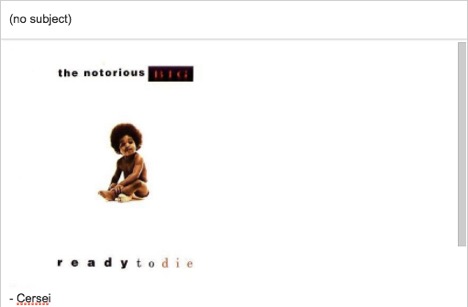