Who Killed It the Most This Week in Playa Escondida?

Last night, we watched with bated breath and intermittent pours of cheap red wine the fourth season premiere of Bachelor in Paradise. We also dabbled in some oft ill-advised live-tweeting, which you can catch up on here.

A quick note on our criteria: basically we’re answering the question, “Did you kill it, or did you sit by the pool narrating other people making out like a dweeb?” Note, too, that not everyone will make this week’s list. Though it is our sincerest hope they will try harder on a pre-recorded television series to do so next time.

13. Ben Z.’s Dog
An all-too-frequent refrain in the Bachelor-verse is the contestants’ complaints about everything they’ve “left behind” to be there. Most of the time, they’re talking about a child, which is a reasonable thing (person) to be worried about leaving behind in order to pursue love or, in the case of BiP, drunken coitus on a remote stretch of Playa Escondida. But Ben Z.? His greatest sacrifice for being in Mexico was that he had to leave his dog. He mentioned it several times, to the point where this recapper called into question whether he was talking about an actual canine or whether “dog” was just a pet name for “my son Ben Jr., who is most definitely a person.” The conclusion reached here: Ben Z.’s dog must be one helluva dog, and a very good boy, aren’t you, aren’t you a very good boy.

12. Taylor and Derek (tie)
Taylor, if you recall, was a 23-year-old know-it-all on Nick’s season of The Bachelor; Derek was some boring guy on JoJo’s season of The Bachelorette. Taylor liked the fact that Derek could build a fire; Derek liked the fact that Taylor liked something about him. Now they’re an official couple on BiP. Likely, they will stay together for the remainder of the season and quietly recede into the horizon, watching forlornly as the light of Camerman #4’s camera fades away…Congratulations Taylor and Derek!

11. Alexis
Alexis is that fun girl from Jersey guys are definitely friends with but never date, in rom-com parlance. She spent a majority of the first episode laying out, chatting with friends, getting drunk, laying out some more and presumably falling asleep next to the pool. In other words, Alexis is on vacation. Which is exactly what Paradise should be. Keep doing you, Alexis. 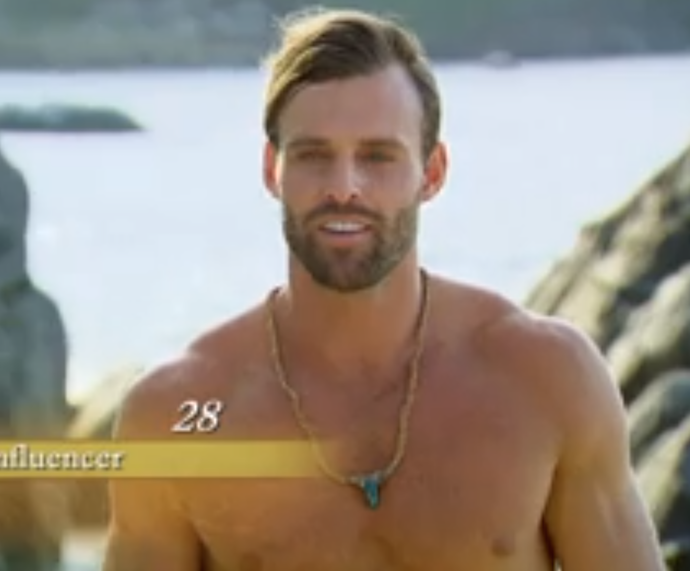 10. Robby’s Hair
Robby came off as kind of a douche last night, what with his 12 abs and talk of “being an influencer” (SHHHH!!!! You’re not supposed to say that shit out loud!). He kind of scared Raven away after their jetski date because she thought he was “prettier” than she was. Indeed, Robby is Bachelor in Paradise Ken, looking for his Bachelor in Paradise Barbie, and that Barbie is not Raven (I think it’s probably Amanda). Robby’s hair on the other hand? I mean, look at it! What is it? It defies all notions of time, space and follicles. Just as Andy Warhol forced us to reevaluate the definition of art, so to does Robby force us to reevaluate the definition of hair. Conclusion: Robby is the Andy Warhol of hair. 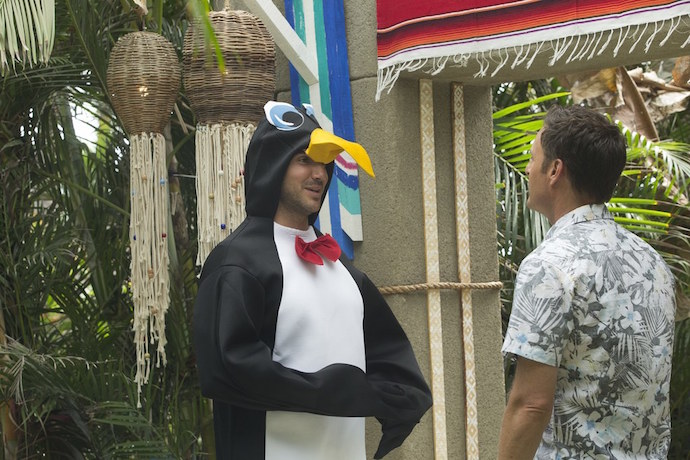 9. Matt
Matt has several things working against him: 1) His hairline is receding; 2) He’s normal-person good-looking; 3) He insists on arriving wearing a penguin suit. And yet, as on The Bachelorette, Matt continues to overcome his personal obstacles. Last night, he stole Jasmine away from Nick “Drunk Santa Claus” [what is his last name] and invited her on a date, where they went to a Mexican drag show and he showed his cajones by dressing in drag himself. Matt is currently my sleeper pick for dude who cleans up most in Paradise.

8. Amanda
Last time Amanda was in Paradise, she ended up engaged to known swindler, heavily-perspirating Josh. This time, she arrives with her Neil Lane engagement ring and gives it back to Chris Harrison. Where in Neil Lane’s return policy does it say you can just hand your ring over to Chris Harrison and he’ll take care of the rest? When a Neil Lane ring is returned by a Bachelor/ette, does Neil Lane himself immediately suffer the same sort of soul-sucking attack that Voldemort does when Harry destroys a horcrux? More importantly: Why didn’t Amanda just sell the ring and put the money towards her two children’s college funds? The answer is simple: the only thing Amanda gives a fuck about is sticking it to Josh. Congrats Amanda—you may be out like 100k, but at least you won the breakup. 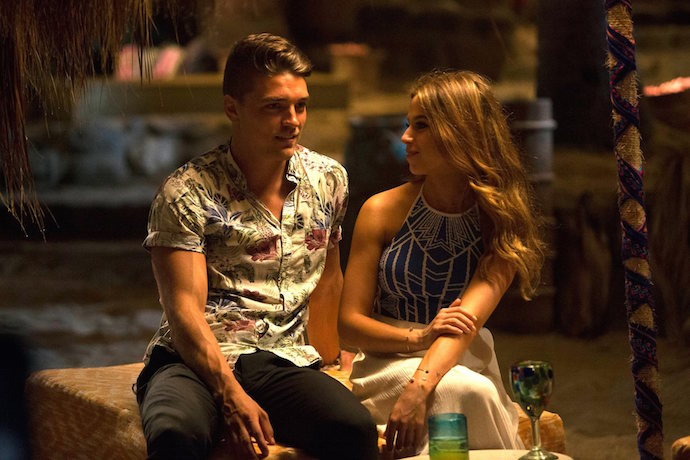 7. Dean
Did anyone catch my boy Dean staying hydrated, then macking on Kristina on a dinner podium set in the middle of some random pool? Dean doesn’t fuck with “getting wasted” and “becoming embroiled in scandals” and “missing his dog back home.” Dean is playing the long-game; he’s here for love. A love which will burn out, and later result in a Bachelor bid. Oh, to be young and Dean!

6. Kristina
Kristina got Dean. Dean is the big prize. Therefore, Kristina sits high on the leaderboard. That is all there is to say about Kristina, who is undoubtedly a wonderful person and exceptional dental hygienist.

5. Jasmine
Jasmine made out with two dudes last night: Nick and Matt. Sure, they were the two dudes most of the other girls would probably only be into if all the other dudes were taken, but they were dudes nonetheless. Keep up the good work, Jasmine. 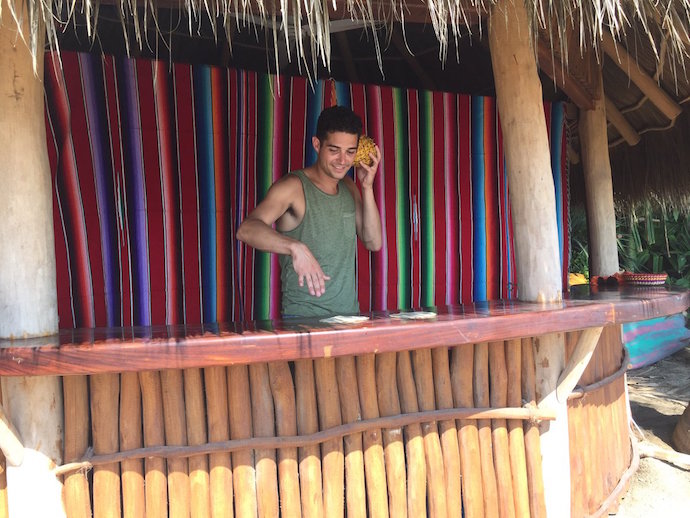 1. You’re sort of above it all, but you can still hook up with the girls (ala Danielle M.).

3. You are basically guaranteed a spot on subsequent seasons of Bachelor in Paradise.

Wells is living his best life.

3. Jorge, the bartender
Jorge made a name for himself as BiP’s bartender, and now he’s off to pursue his dreams of starting his own business. Becoming slightly famous for serving drinks on a reality show, then using said fame as a springboard for your own business venture is as pure an expression of the modern American Dream as there's ever been.

2. Raven
Nobody kept it more real than Raven last night. She saw through DeMario’s bullshit. She went on a date with Robby and decided she wanted a real man instead of a doll with 12 abs, impeccable skin, influencer-status and a hairstyle that took longer to prepare than hers did. And she even made out with Ben Z. to flout that fact. Raven is the coolest person in Paradise, which is roughly the equivalent of being the artsiest bro in the University of Michigan chapter of Alpha Epsilon Pi.

1. Bachelor in Paradise
The biggest winner this week is the show itself. Just think about what was accomplished here: they used the scandal (between DeMario and Corinne) that threatened the show’s existence as dramatic irony on the show itself. They leaned into it; cashed in on it. Was it morally dubious? 100%. But was it aslo a masterstroke of reality television production? Definitely. Watching last night’s episode, it became uncomfortably clear why the scandal was never going to hurt the show: the factors that led to the scandal in the first place—copious amounts of alcohol, sexual promiscuity, a tacit understanding that you’re here to "hook up"—are the very same factors that make the show worth watching in the first place. As Jennifer Weiner suggested, it’s impossible to enjoy the show without being complicit in the scandal ourselves. Damn you and your moral connundrums, Bachelor in Paradise!