Yes, They Dated Seriously In College. Yes, They’re Both Starring on ABC Right Now. Yes, We Have Some Conspiracy Theories On How This Could Actually Happen...

Photos: GIPHY (GIF)
For about six minutes during the fourth quarter of last night’s Game 3 of the NBA Finals there was hope that things might actually get interesting. The Cavs were up. The series that was almost definitely looking like a Warriors sweep was about to be 2-1.

Then Kevin Durant pulled up comfortably outside of the three-point arc--and LeBron’s outstretched hand--to launch a dagger right into the heart of that hope. Game over. Warriors win again. Oh well, that was fun...almost.

Meanwhile, just two days earlier on The Bachelorette, fellow ABC heartbreaker Rachel Lindsay sent home a local boy who’d been pining for her since grade school in equally crushing fashion. Just the latest defining moment in her own First Ballot Hall of Fame turn as the Bachelorette.

And then we learned of this revelation: Rachel and KD actually seriously dated while undergrads at UT Austin and either his ascent to the ranks of the NBA or hers to law school cut their romance short.

It’s not entirely clear how long they dated or why it really ended. US Magazine claims it was Rachel’s move for law school. But we also have to think that Kevin Durant’s jump to the NBA after only a single year of college could’ve played into this. Especially because he was headed to nowhere-near-Texas Seattle. Either way, it sounds like the door is still wide open to us. So you're saying there's a chance?

Is it possible that they could get back together? That this season of The Bachelorette is about to get hijacked by the greatest love story of them all? That ABC could be sitting on the greatest single cross-over hit the world has ever seen?

Let's look at the evidence, and subsequently allow ourselves to get extremely carried away.

Is it at all possible that the producers of The Bachelorette had no idea about Rachel's past relationship with NBA great Kevin Durant?
We don't use this word lightly, but LO-fucking-L.

Last night during a half-time interview, NBA Commissioner Adam Silver called NBA basketball great reality television, regardless of the fact that it’s the same damn teams playing each other over and over again.
Interesting analogy there. Makes you wonder whether he's been hamming it up with ABC execs and Bachelor producer Mike Fleiss.

A few days ago, Stephen Curry was quoted as saying, with regards to his friendship with KD, that he feels like he's on a dating show.
Suspicious phrasing again. It doesn't even make sense. You can just imagine the conversation KD and Steph had in the locker room after one of their post-season wins. The rest of the team has gone home. The reporters are gone. It's just the two of them, caught up in the excitement and camaraderie of a big win. KD feels vulnerable. Like he's ready to trust an all-star point guard again. And just like that, he spills the beans: I secretly got back together with my ex-girlfriend and one true love, Bachelorette Rachel Lindsay, and am now secretly engaged to marry her in what will be the most dramatic moment in Bachelor history. To which Steph responds:

Rachel is subconsciously projecting her residual feelings for Kevin Durant onto her suitors.
Why else would she conspire with known Bachelor-hater Kareem Abdul-Jabbar to design a basketball date, then send home the only guy there that could dunk, but not, like, KD dunk?

Oh, AND we just found his Cast Bio. 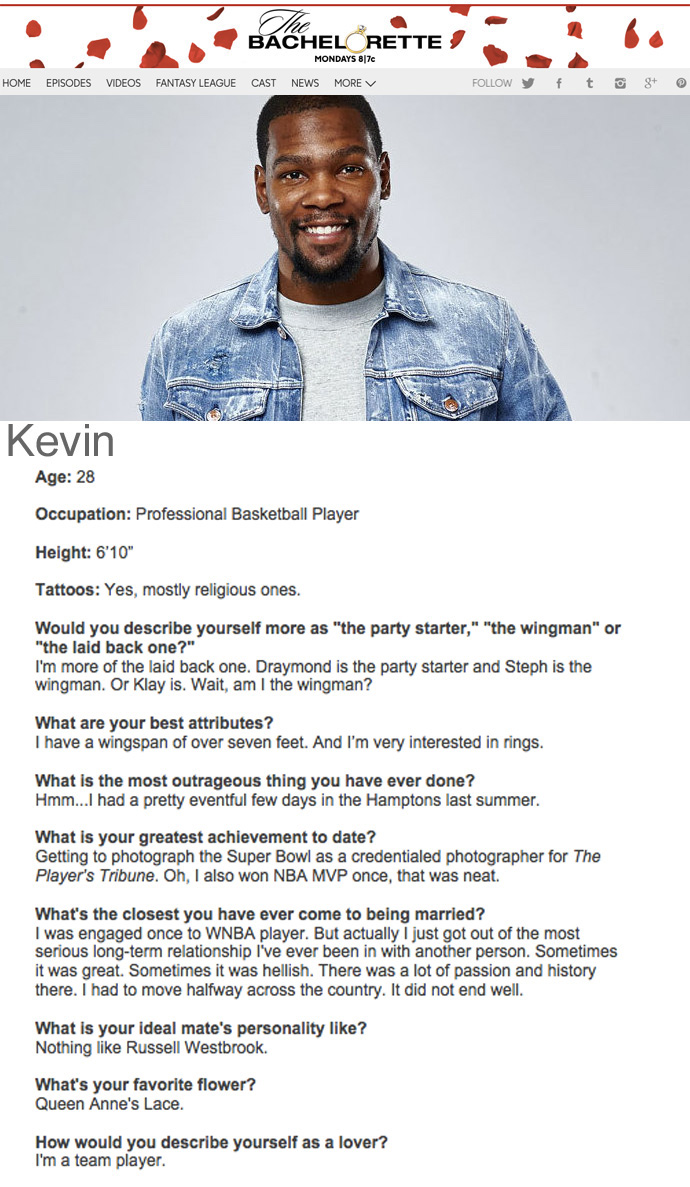