We Caught the Pop-Star Duffing It In Brazil...

We usually don't pay any mind to the whereabouts of pop-stars (we’ll leave that to the Tiger Beats of the world).

But, considering this is UrbanDaddy Golf, we couldn’t let this pass; Ed Sheeran hit the links in Brazil during a short break from his world tour this weekend and...well, we’re still trying to make sense of it all.

From the looks of it, Ed Sheeran is not an avid golfer. From the looks of a quick internet search, Ed Sheeran’s only previous notable golf-related news is about a drunken escapade with Justin Bieber that ended with Ed Sheeran trying to strike a ball off of the Bieb’s face and getting a club full of cheek.

This does not bode well for Ed Sheeran’s game. But we thought we’d give the guy a chance anyway—and since these photos of his golf outing just landed in our lap, we might as well take a look at his swing to see if there’s any possibility we could see him on the celebrity Pro-Am circuit anytime soon. 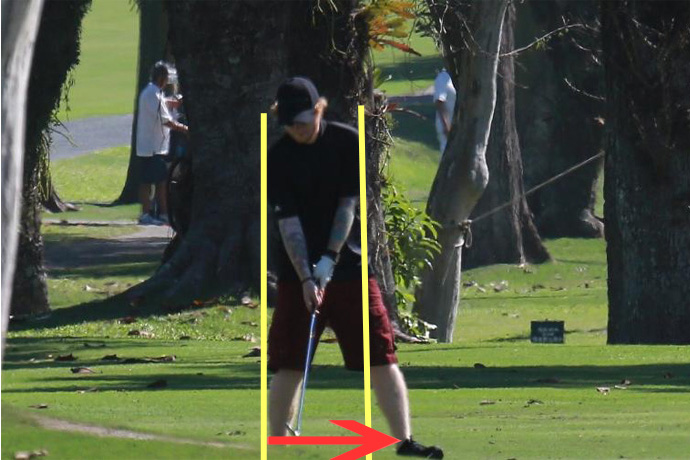 First, obviously we’re not Hank Haney, so don’t expect us to fix this guy’s swing overnight—but we think we can help correct some of the fundamentals young Ed is missing here. We’ll begin with his address of the ball. Generally, you want to start with your feet somewhere in the shoulder-width-apart range and feel your center of balance that stacks your shoulders, hips, knees and feet. Here you’ll see that Ed’s sticking his lead leg way out in front. 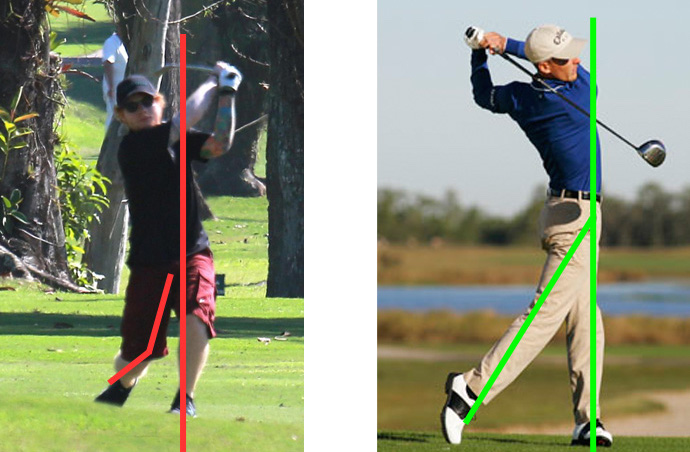 Now let’s look at his swing mechanics. We’ve put a side-by-side here of Ed’s follow-through with a proper follow-through. You’ll see the green lines on the proper follow-through that show what it looks like when your hips have properly swung through contact with the ball. There should pretty much be a straight line you can draw along your shoulder-leg-foot line and your back leg will have rotated forward, bringing your knees closer together. This looks nice. Now let’s look at Ed’s follow-through. He’s lunging forward, he’s nowhere near any straight-line-ness, he's got kind of a Happy Gilmore thing happening, but not in a good way. The back leg is in a crouch because he definitely didn’t rotate his hips through his swing. It’s a mess. 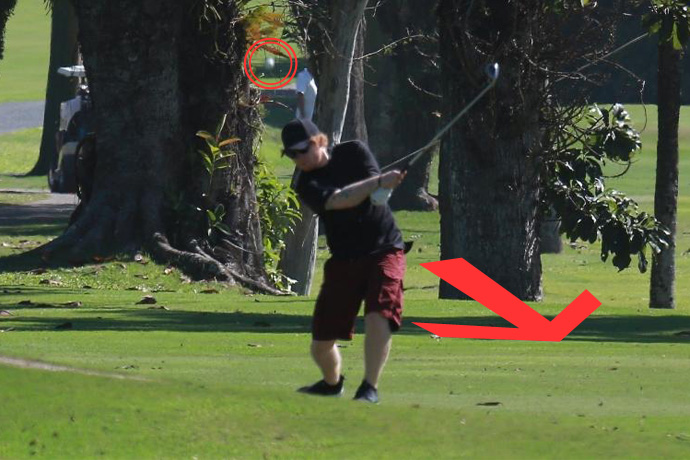 And finally, we can see the result in this image, where a very brave paparazzo has managed to snap a photo right as the ball was launched. As you can see from the red bull’s-eye, the ball is not traveling anywhere near the direction it should be (the arrow) and is instead a strong shank right at the camera.

Unless Ed was pulling off a daring trick shot to scare away this photographer, he’s terrible at golf. Then again, the story where he totally flubs a shot and cracks Justin Bieber in the face could’ve been a veiled attempt at disfiguring one of his top competitors for the tween-pop crown.

Maybe Ed's fooling us all.