Who’s the Lesser of the Two Evils? 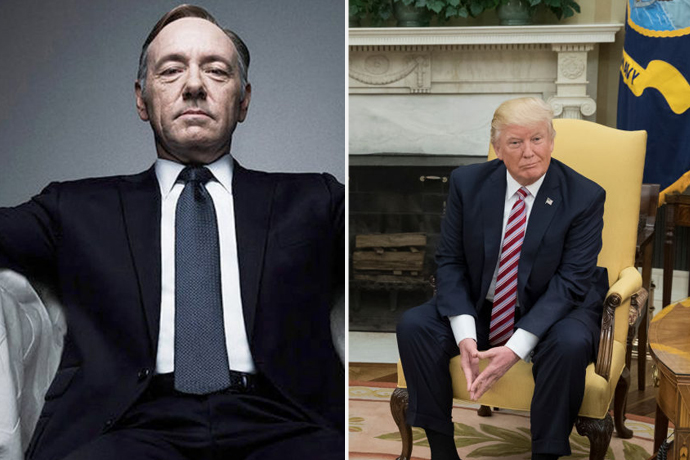 Today, Netflix released the much-anticipated fifth season of House of Cards. We’re sure you, like us, are just itching to spend the next week on the great binge (that’s if you didn’t just call in sick today).

This is Necessary Comparisons: President Underwood and President Trump.

Notable Physical Takedown
FU: Surreptitiously threw Zoe Barnes in front of a moving train.
DT: Once body-slammed, beat and shaved Vince McMahon. Hey, Congressman-elect Gianforte had to learn that move from somebody.

What the Russians Have on Them
FU: A backchannel deal involving the Jordan Valley and Claire Underwood’s removal as UN Ambassador.
DT: Please let us know at your earliest convenience, Mr. Comey.

Sexual Fetish
FU: Threesomes with his wife and other men.
DT: Golden showers, if we are to believe reports from impeccably credentialed British intelligence officers.

Principled War Veteran-Turned-Politician Who Hates Their Guts But in Their Reckless Pursuit of Power Is Nonetheless Willing to Support Them
FU: Jackie Sharp
DT: John McCain

Famous Tic
FU: Rapping his knuckles on hard surfaces.
DT: That smug-as-fuck smirk you want to wipe off his face without actually having to touch his face, because that would be gross.

Preferred Method of Exercise
FU: The rowing machine in his basement.
DT: Would rather spend his finite number of heartbeats bum-rushing diplomatic photo ops than doing any sort of cardio.