What Would You Bring to JFK’s 100th Birthday Party?

A Few Suggestions From UD 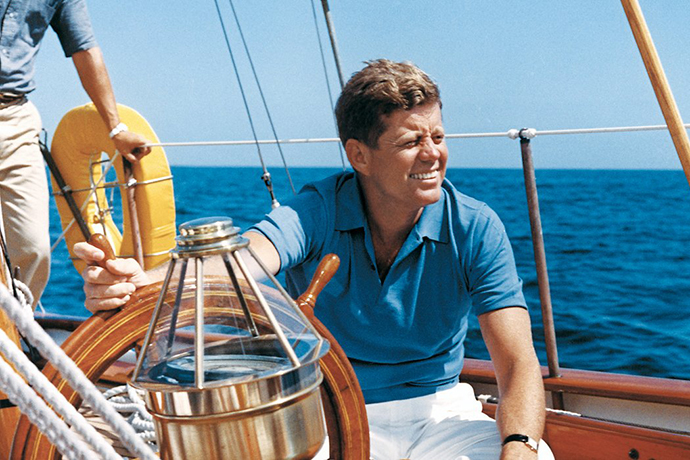 Sometimes, when CBO scores expose the spinelessness of some elected representatives, or our current President’s childish attempts to seriously obstruct justice are too insane, we allow ourselves a moment of pure political, no-body-slamming-allowed fantasy.

The fantasy does not include body slamming.

But, on the Friday before the Monday that would’ve been JFK’s 100th birthday, we got to thinking: what would our dapperest president’s party be like were he still alive? And just what would we make sure to bring?

Let your mind wander to the shores of Nantucket Sound. Clouds of smoke from the grill billow above the stately main house. Frank Sinatra’s hologram performs on the sprawling lawn to a crowd of well-dressed statesmen, influencers and celebrities. Graydon Carter, George Clooney and Barack are all there, because that collection seems right. The man of the hour is sitting back in his wheelchair, clad in an oversized shawl-collar cardigan and some downright perfect tortoise shell Moscots.

You arrive at the door (gates? drawbridge?). What do you have in tow?

Andrew Bradbury: A really nice lighter in case I found myself alone on a back deck with the ex-Prez and he went to light a cigarette, a cigar or perhaps even a j (there’s a rumor he indulged in weed to help his chronic back pain).
I would also bring a copy of Profiles in Courage, a book from a more a serious age of political discourse. “A man does what he must—in spite of personal consequences, in spite of obstacles and dangers and pressures—and that is the basis of all human morality.”

Hadley Tomicki: A notebook and one of those little golf pencils. I really don’t like politicians. I do, however, really like politicians’ hair. So once I was a few drinks in, I’d corner JFK and ask him a bunch of uncomfortable questions about his hair routine, taking detailed notes along the way.

Thompson Brandes: I think he’d hit it off with my Uncle Paul, who is 84 years old and super handsome. He has this joke where he steps on your big toe and then asks if it hurts, so that after you respond accordingly, he can expertly tell you, “Well, then you better call a toe truck.” We’ll save that comic gold specifically for the big man.

Then I reach into my back pocket. Therein: 15 Dr. Peppers.


Geoff Rynex: Bringing someone blonde and buxom ought to get me in the door. As gifts go, I think some Primeknit Stan Smiths and a suede bomber would be a nice update to his casual Hyannis Port look while staying true to his style.
Sam Eichner: I know what I would not bring: my significant other. JFK was one of the most legendary stickmen of all-time (others include: Prince, Leonardo DiCaprio, and, naturally, Warren Beatty). My grandmother told me a story about seeing him at a rally in New York, and how every woman in the audience would’ve ditched their husbands to sleep with him right then and there. (FYI: I believe my grandfather was present while she told this story.) This was weird, because it was coming from my grandmother, and also highly informative, for the same reason.

But I digress. I would bring a nice bottle of aged rum. I hear that, like me, the man enjoyed a good daiquiri—the Hemingway kind, not the bullshit slushie kind.