The Most Dramatic Bachelor Finale Precap Yet 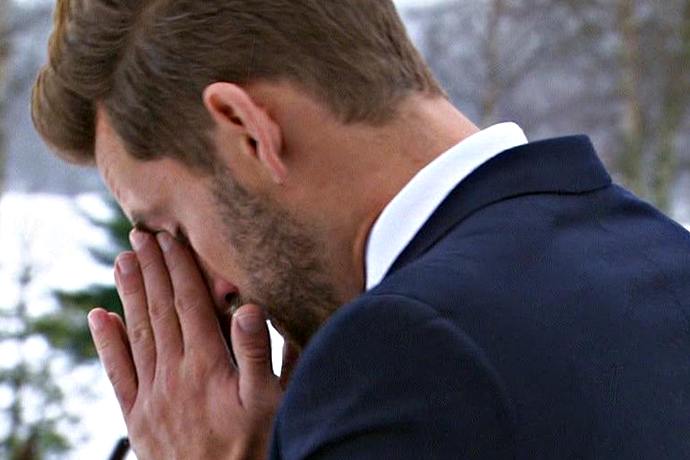 Before tonight’s finale of the most dramatic season of The Bachelor to date (no, but really), two editors and professed superfans attempt to make sense of the madness, and offer a few sage predictions of what’s still left to come.

Sam Eichner: What a season. What a man. What a world extremely manipulated for the purposes of good television.

Together, we’ve lived vicariously through our Bachelor Nick Viall for the past few months. Now, it’s time to assess.

We had our highs. We had our lows. We laughed. We cried. We consumed far too much champagne and cheese, which subsequently made us go sleepy during rose ceremonies and pool parties and other times during which it was not appropriate to go sleepy.

We were visited by the ghosts of back-tatted one-night stands, alarmed by bouncy castle dry humping and schooled by a 23-year-old mental health counselor who probably got a 4 on her AP Psych exam but totally lied and told everyone she got a 5.

In a twist straight out of Penthouse Letters, we got naked under a trench coat and tried to seduce a 36-year-old future Dancing With the Stars contestant with suggestively placed whipped cream.

During one brief interlude, we somehow touched on serious issues of race and interracial relationships; during another, we watched a heretofore climax-less 25-year-old skip through a village in Finland, kissing reindeer and clacking her heels after finally achieving orgasm.

We discussed our “core values,” before receiving a handwritten letter from Chris Harrison asking us if we’d like to forgo our individual rooms and stay together as a couple in the fantasy suite.

We elected our first black Bachelorette, in a stunning pre-finale reveal on Jimmy Kimmel Live.

We fell in love.

We were, above all, here for the right reasons.

And tonight, as we ride our mumbling, bearded, Wisconsin-born-and-bred vessel into Finland’s quickly fading sunset (what do they have, like three hours of daylight there?), we will finally decide—after a few failed attempts—who we wish to share our life with.

I’ve never been more ready. How about you?

Najib Benouar: What a time to be alive, indeed, my comrade in unabashed Bachelor fandom. What a time.

Thanks for taking us on that journey through Nick’s journey to find love. They’re always calling it a “journey” and that usually feels like a throwaway line, but for real, Nick has gone through a Revenant-like quest to find love on television over the past few years now.

I’m excited, but I will say this: for a season where the Bachelor was constantly way too in his own head about everything, it seemed like the producers were, too. I spent just as much time wondering what they were thinking (why reveal Rachel now? Why push rose ceremonies halfway into the next episode? Why was Corrine’s exit so perfectly timed with the women’s tell-all?) as I did about who he was sending home. Also, didn’t it sometimes feel like being the front-runner simultaneously meant you were getting sent home? Kristina was running table right up until her ouster. Both Danielles seemed to be sent packing just as their stars were rising. Corrine... Okay, I’m a Corrine apologist.

SE: The tectonic shift in public opinion from anti-Corrine to pro-Corrine has been nothing short of astounding.

NB: Enough about what was and what could’ve been, though. Let’s talk about the here and tonight: Raven versus Vanessa. Hot takes?

SE: A few short weeks ago, it seemed downright impossible that Raven, a small business owner from Hoxie, Alabama, with a history of high-heel-related violence and bad sex, could win Nick’s heart. But after last week, I’m not so sure. The fact that she was so obviously game to star in her own 500 Days of Summer–like “I Just Had Sex” montage makes me think she’s smarter, cooler and more self-aware than we’ve given her credit for. I’m all in on Raven.

SE: Good point. And I’m starting to cool on Vanessa, too. Their date offered a glimpse into a bleak future, in which Nick comes home tired after a long day of being on Dancing With the Stars and definitively not being a software sales exec to Vanessa nagging him about why he didn’t even so much as touch the mostaccioli her mom made at her family’s last Sunday dinner. Her “core values” bother me, partly because she keeps calling them “core values,” and partly because she had a guest spot on Blue Mountain State. How can you badger Nick about “core values”—and not moving to LA—when you were on a TV show that devoted an entire episode to a bunch of dudes using a single, unwashed “pocket pussy”?

NB: You know what, you’re right. That is the sad truth. The only relationship that matters, that’s ever mattered, is Nick’s relationship with the franchise. When will they finally break it off for good? It’s getting toxic. Is he really going to hold another season hostage if this one doesn’t work out for him? Totally plausible. More importantly: what dirt does he have on Chris Harrison?

SE: I honestly want to believe that he and Chris Harrison are boys, and that Harrison has been using his powers as Bachelor host—powers that fall somewhere between that of a Division III college basketball coach and a phone service matchmaker—to hook Nick up with chicks for as long as it takes.

NB: I refuse to believe Harrison would take part in any such foul play.

Also, I’m not all in on Vanessa, either, but I can play the devil’s advocate here and predict she’ll win. Especially because that “bleak future” you spoke of before is called “marriage.” These people are already acting like an old married couple. That’s a sign, though not so cheery, that they can get there.

SE: I see your point re: marriage. I’m really showing my age.

I think it’s clear that Vanessa is the front-runner. If Nick wanted to get rid of her, he would’ve done so already. Unless the same glitch in the Matrix that resulted in a Trump presidency and the Oscar flub is at play here, and the masters of our simulated universe conspire to deliver Raven the final rose, Vanessa has this in the bag.

So let’s put that aside for now. Here are some other things to look out for tonight:

—A dramatic moment wherein previews manipulate the viewing audience into thinking Nick is going to get rejected, or pull a Brad Womack (i.e., pick no one).

—Some sort of mawkish gift from each remaining Bachelorette. One hopes either Raven or Vanessa thinks herself capable of writing a love poem.

—Nick’s family bonding with Vanessa over having grown up in cold-weather climates to forestall actual conversation.

—Nick’s mom saying to Nick, about Raven, something to the effect of: “She’s only 25. Do you think she’s ready to settle down?”

—Nick’s dad simply being happy to be along for the ride.

—Tears from all three contestants, plus Nick’s mom.

NB: All valid things to look out for. Particularly that last one.

Here are a few of mine:

—Corrine is a first ballot Bachelor in Paradise inductee. As are shark-dolphin enthusiast Alexis, Jasmine “Choke Artist” G. and Liz the Doula.

—Neil Lane is going to fly into Finland with a new set of rings, just so he can bust Nick’s balls. Again. That guy.

SE: I will fast-forward any and all Neil Lane–related segments, provided I have the technical capabilities. Sorry, Neil Lane.

NB: And one other to keep an eye out for: if Nick rubs anyone’s thigh during a heart-to-heart tonight, they’re going home.

Have you noticed that’s his poker tell? If he rubs your thigh, it’s game over. I first noticed it with Danielle L. Definitely saw him give Kristina the rub. And Rachel got the rub, too, last episode.

I wish I had a GIF montage of this to prove my point. Anyway, it’s a thing. Raven. Vanessa. Chris Harrison. No thighs are safe.