The Real Question Is, How Can the Oscars Top That Insanity Next Year?

Here Are Some Unbelievable (Fake) Ideas Already Being Discussed 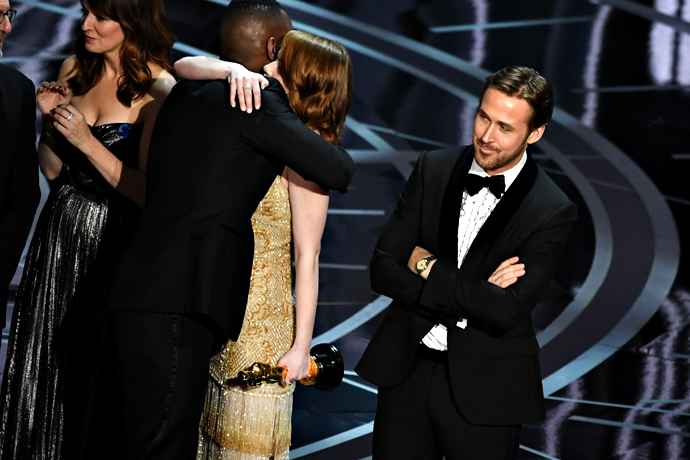 Right now, in a top-floor executive suite somewhere beneath the Hollywood sign, a frenzied meeting is taking place.

In attendance: the Academy of Motion Picture Arts and Sciences Board of Governors, forensic accountants called in from PricewaterhouseCoopers, assorted top brass from ABC and, of course, adorable Sunny Pawar. That kid really brightens a room.

Anyway, they want to know how that whole “giving out the wrong Oscar” thing happened last night.

But more importantly, how to top it next year. That thing was, like, so viral.

So let us now listen in on some of the reasons you may be tweeting about the telecast in 2018.

“Someone call Oprah to host. Parachuting awards for everybody.”

“I like Jimmy’s idea. The awards drop one at a time. Whoever catches it wins.”

“Yes, yes, that’s good. Very Hunger Games, which is ready for a reboot.”

“What if it was cocaine in the parachutes?”

“No, no, no: I got it. Instead of ‘In Memoriam’ (boring!), we get that ESP kid, that skinny blond one... the Hollywood Medium, Tyler Henry, to commune with the dead onstage.”

“Does anyone know who reps Slimer? Say he busts in halfway through, and Kate McKinnon has her proton pack. She needed better material.”

“Or we give Trump an award, just to get him to show, but then we trap him in the Phantom Zone prison dimension, like Zod.”

“Hey, who let Michael Shannon in here? Anyway, has Gosling signed off on that no-shirt clause?”

“Someone call Gary from Chicago. Maybe we get him together with Ken Bone and make some magic.”

“New rule: if your Oscar is more than 10 years old, it’s up for a revote. We’re looking at you, Shakespeare in Love.”

“I think Best Picture should just go to the celeb Instagram post that best encapsulates the evening.”

“I thought we were agreed that kid from Lion would host. You down for that, Sunny?”

“We already locked Beatty and Dunaway into a five-year contract, guys. Sorry, Sunny.”

“Anyway, what if we replace being played off with a trapdoor?”

“Or all presenters get wired to electrodes. Fifty-thousand volts to whoever misspeaks.”

“We should give everyone a real big sandwich. A lot can happen when you add sandwiches. Sandwich GIFs, mustard stains...”

“Let’s make the chairs movable. Give the people a better glimpse of low-key Hollywood shade at work.”

“Let’s round up some puppies who thought they were going to the vet, and let them run free all night.”