They Couldn’t Have Said It Any Better 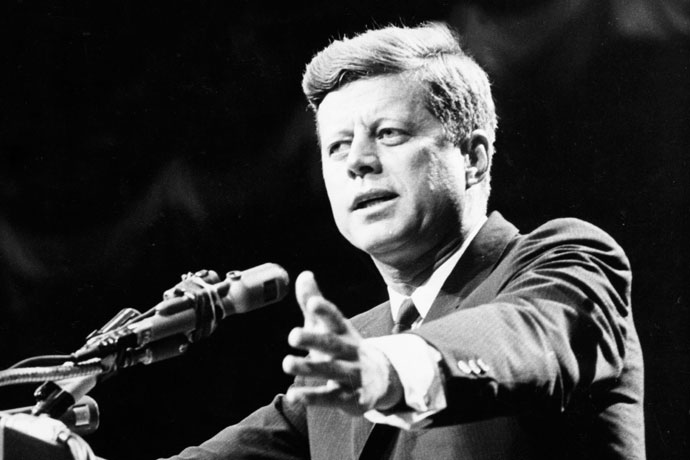 Today the United States of America swears in its 45th president.

It’s a tough job. Its responsibilities are myriad. Its complexities, enormous. Its power, awesome.

So it’s a time for wisdom—and who better to impart it than the 43 other gentlemen (you know that nonconsecutive president Grover Cleveland is counted twice in the presidential lineup, of course) who have held the reins of the country in their hands for a while. If these guys don’t know a thing or two, then no one does.

Because even our worst presidents have something to offer.

Or at least we hope.

“Associate yourself with men of good quality if you esteem your own reputation; for ’tis better to be alone than in bad company.” —George Washington

“Facts are stubborn things; and whatever may be our wishes, our inclinations or the dictates of our passions, they cannot alter the state of facts and evidence.” —John Adams

“An insult unpunished is the parent of many others.” —Thomas Jefferson

“The means of defense against foreign danger historically have become the instruments of tyranny at home.” —James Madison

“Let us by wise and constitutional measures promote intelligence among the people as the best means of preserving our liberties.” —James Monroe

“Patience and perseverance have a magical effect before which difficulties disappear and obstacles vanish.” —John Quincy Adams

“Our government is founded upon the intelligence of the people. I for one do not despair of the republic. I have great confidence in the virtue of the great majority of the people, and I cannot fear the result.” —Andrew Jackson

“The government should not be guided by temporary excitement, but by sober second thought.” —Martin Van Buren

“The liberties of a people depend on their own constant attention to its preservation.” —William Henry Harrison

“Parties are continually changing. The men of today give place to the men of tomorrow, and the idols which one set worship, the next destroy.” —John Tyler

“Minorities have a right to appeal to the Constitution as a shield against such oppression.” —James K. Polk

“I would not be the mere president of a party. I feel bound to administer the government untrammeled by party schemes.” —Zachary Taylor

“The law is the only sure protection of the weak, and the only efficient restraint upon the strong.” —Millard Fillmore

“There is nothing left to do but get drunk.” —Franklin Pierce

“The test of leadership is not to put greatness into humanity, but to elicit it, for the greatness is already there.” —James Buchanan

“I destroy my enemies when I make them my friends.” —Abraham Lincoln

“I never thought I would be impeached.” —Andrew Johnson

“The friend in my adversity I shall always cherish most. I can better trust those who helped to relieve the gloom of my dark hours than those who are so ready to enjoy with me the sunshine of my prosperity.” —Ulysses S. Grant

“Free government cannot long endure if property is largely in a few hands, and large masses of people are unable to earn homes, education and a support in old age.” —Rutherford B. Hayes

“The chief duty of government is to keep the peace and stand out of the sunshine of the people.” —James Garfield

“As is natural with contiguous states having like institutions and like aims of advancement and development, the friendship of the United States and Mexico has been constantly maintained.” —Chester A. Arthur

“Our citizens have the right to protection from the incompetency of public employees who hold their places solely as the reward of partisan service.” —Grover Cleveland

“The bud of victory is always the truth.” —Benjamin Harrison

“War should never be entered upon until every agency of peace has failed.” —William McKinley

“To announce that there must be no criticism of the president ... is morally treasonable to the American public.” —Theodore Roosevelt

“The trouble with me is that I like to talk too much.” —William Howard Taft

“I not only use all the brains that I have, but all that I can borrow.” —Woodrow Wilson

“Words without actions are the assassins of idealism.” —Herbert Hoover

“Yours is not the task of making your way in the world, but the task of remaking the world which you will find before you.” —Franklin D. Roosevelt

“We must guard against the acquisition of unwarranted influence, whether sought or unsought, by the military-industrial complex.” —Dwight D. Eisenhower

“If we cannot now end our differences, at least we can help make the world safe for diversity.” —John F. Kennedy

“Yesterday is not ours to recover, but tomorrow is ours to win or lose.” —Lyndon B. Johnson

“The three most difficult words to speak are: I was wrong.” —Richard Nixon

“The political lesson of Watergate is this: Never again must America allow an arrogant, elite guard of political adolescents to bypass the regular party organization and dictate the terms of a national election.” —Gerald Ford

“When people are intimidated about having their own opinions, oppression is at hand.” —Jimmy Carter

“Evil is powerless if the good are unafraid.” —Ronald Reagan

“We don’t want an America that is closed to the world. What we want is a world that is open to America.” —George H. W. Bush

“When times are tough, constant conflict may be good politics, but in the real world, cooperation works better.” —Bill Clinton

“Leadership to me means duty, honor, country. It means character, and it means listening from time to time.” —George W. Bush