The Most Anticipated Season of The Bachelor Premiered Last Night 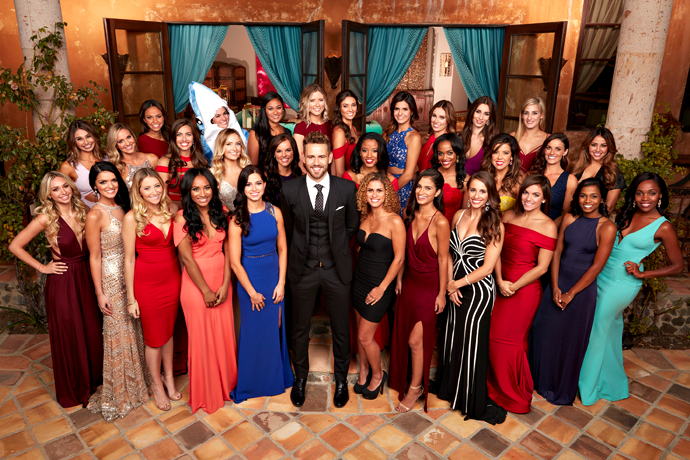 Following the premiere of the most anticipated season of The Bachelor to date (no, but really), two editors and professed superfans attempt to make sense of the madness. What follows is that failed attempt.

Sam Eichner: So it begins, again. A new year, a new opportunity for one person to find Fake-Real Love with someone who may or may make a first impression by wearing a full-body dolphin suit. (Or is it shark? More on that later.)

Viall is not like other bachelors. Denied love as a mortal twice on The Bachelorette—first by Andi “Does She Still Practice Law?” Dorfman and then Kaitlyn “Check Out My Sexy Back Arm Tat” Bristowe, he was delivered to Paradise (otherwise known as an oceanfront property in Tulum with a dangerous open-bar policy), where, denied love once more, he was banished from the heavens and sent to earth as a god amongst 30 women, all of whom will vie for his heart, and one of whom will claim to possess a “platinum vagine.”

Najib Benouar: Yes, I am all in on your Greco–Bachelor Nation origin story. There’s still more to be written, of course. Most importantly, will the final chapter see him emerge as Zeus—the greatest and most recognizable figure upon Mount Fantasy Suite—or Sisyphus—condemned to roll a heavy boulder of Fake-Real Love up a hill on Harrison Ranch for eternity?

SE: This is the ultimate question. But first, let’s pause to consider the implications of Viall’s journey. The guy was already the most cerebral Bachelor to ever play the game (err, “attempt to find love”). How he was cast in the first place is anyone’s guess, but whoever was responsible deserves a belated Presidential Medal of Freedom. On Andi’s season, he was a villain who didn’t know he was a villain. On Kaitlyn’s season, he was a villain who kind of knew he was a villain. And then on Bachelor in Paradise, he was just, well, a guy on Bachelor in Paradise. I always got the sense that he secretly felt he was above the whole thing, but decided to suck it up because he actually really fell in love, which amounts to a twisted sort of sincerity.

Now, imagine living your entire life, dying and returning to live it again, knowing all the things you learned the first time around. Then imagine that this imaginary scenario is not, in fact, the plot of the emotionally devastating Adam Sandler dramedy, Click. That is what we’re dealing with here, more but most likely less. Please, do not let the clip of Nick ostensibly walking to the Chicago Salesforce offices while listening to the Nerdist podcast network (an educated guess) with a messenger bag slung lazily over his shoulder fool you: Nick, my friends, is no software salesman. He is a bona fide professional Bachelor contestant.

NB: Seriously, he’s reaching possible-future-US-president levels of reality television ubiquity at this point, and he still has an entire season to build upon it. #ViallHarrison2020. (Please note that’s also a reference to Nick’s advanced-in-Bachelor-terms age. He started this show already on the older side; now, four seasons later, he’s even older.) Okay. We need to get down to business here and talk about last night’s premiere. Initial thoughts?

SE: Najib, I could stand here on my little Neil Lane wedding ring soapbox and discuss any number of oddities in these first 90 or so minutes of action. Like the fact that Lacey rode up on a camel and told Nick she heard he likes a “good hump.” Or the fact that there are four different kinds of nurses on this season (registered; travel; neonatal; surgical). Or the fact that Corinne, by giving Nick tokens to cash in for hugs and kisses, is either subtly commenting on the transactional nature of intimacy in the digital age or else trying to enact a Pretty Woman–like role-play scenario in the fantasy suite.

But let’s just skip to the most important points:

1. Nick has already slept with one of the contestants, at Paradise-graduates Jade and Tanner’s wedding, no less, and that contestant is a doula named Liz.

Care to comment on either of these topics, Najib? Or is there something else that stuck out to you?

NB: 1. So much to unpack with Liz the Doula. Aside from having the makings of a solid underground rap name, she’s also already got the makings of this season’s villain. Usually it takes at least half a season or more for someone to weasel their way into the bedroom, but she’s already got that covered. She’s already playing mind games with Nick by not revealing her identity outright. And she never called him back. For nine months. Until ABC came calling, of course. Speaking of nine months, if she’d hopped out of the limo with a newborn (that she helped herself deliver?), that would’ve been amazing. Could this all be part of a long con? By the way, how amazing is it that their tryst happened during a Bachelor-related event, so even though their “first fantasy suite date” technically wasn’t Bachelor-sanctioned, ABC still has footage of how it went down. Wow. Give Chris Harrison all of the Emmys now.

2. Rachel crushed the first episode. She’s currently pitching a no-hitter going into the second inning. And speaking of firsts, I may be getting way ahead of myself, but she definitely has next Bachelorette potential. And, thanks to the expertly crafted “This Season On,” we know she at least makes it to Finland. Whatever that means.

3. YOU DIDN’T MENTION THE SHARLPHIN? Come on, we need to talk about the girl who showed up dressed like a shark, claiming to be a dolphin. The costume had gills. Sharks breathe with gills. Dolphins breathe through blowholes. This does not bode well for Alexis, “aspiring dolphin trainer,” keeping all of her limbs. Or getting many more roses.

SE: Yes, it’s alarming that someone so unabashed about her adoration for dolphins would dare dress up in an anatomically incorrect costume to meet her potential husband. It’s more alarming, though, that the contestants who wear costumes on the first night always get the first rose. And it’s more alarming still that Nick gave Liz a rose. Nobody in the history of this television program has ever been there for less-right reasons. Like you said, I wouldn’t be surprised if, at the end of the season, we discover that Liz has been dealing with a Peggy Olson–style secret pregnancy that she doulas herself on national television during an extra-special edition of The Women Tell All.

When in doubt on the first night, I think Bachelors should always ask themselves whether their suitors pass the How I Met Your Mother test. For example: I could see Nick telling their children how he met their mother, Alexis, now an actual dolphin trainer (and/or eponymous shark in a future Jaws reboot), on a reality television show. “She dressed as a drunk dolphin. I thought she was a drunk shark. It was kind of cute.” But Liz? How is Nick supposed to tell his kids he banged their mother at a wedding, she never called him again and then she showed up as a contestant on The Bachelor nine months later? He can’t. Or, well, he can.

For our sake, let’s hope he can.