It’s a Bi-Level Throwback in Chinatown 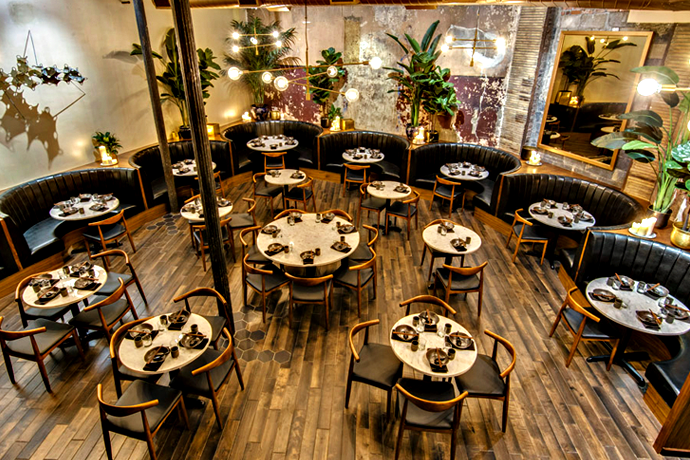 The point is, double-edged swords are less cool than single-edged ones. And we consider the following news to have both a handle and a blade.

It’s the news of Chinese Tuxedo, an ample Chinatown reclamation for predinner cocktails and Cantonese dinners. It opens tonight under the guidance of Eddy Buckingham (formerly of the Liberty) and co.

To give you an idea of the setup, this was once an opera house, and also the scene of a famous early-20th-century Chinese gang shootout. Frankly, we’re astonished that Doyers Street could even fit an opera house at any point, but here we are, left only with a humble, giant ode to the salad days of the neighborhood.

At Street Level:
The bar. For now, it’s strictly a beer-and-wine operation, with a bunch of Chinese beers available. In the new year, though, expect some low-ABV cocktails, and expect them to contain Chinese spirits. Buckingham is a personal mixologist to Justin Timberlake, if that helps nudge you here.

Below the Ground:
The dining room is the sprawling, old-world kind that third dates and mildly irritating Instagrams are made of. You’ll get a pleasing version of the rice porridge known as congee just after being seated amongst the tall potted plants and black crescent banquettes.

From then on, you’ll have some decisions to make (menu here). Roasted duck salad or housemade egg noodles with konbu butter, XO sauce and pork floss? Bone-in sirloin with Jiangsu sauce or mapo lo mein with spicy pork? All of it?

For the vegan in your life or yourself, they’re also doing well by you: dumplings of braised shiitake mushrooms, flowering garlic stems, snow pea leaves and jicama are one option.

Soon:
The building will also house the Good Sort, where coffee and tea will be.