He’s America’s Most Perfect Pop Star at the Moment 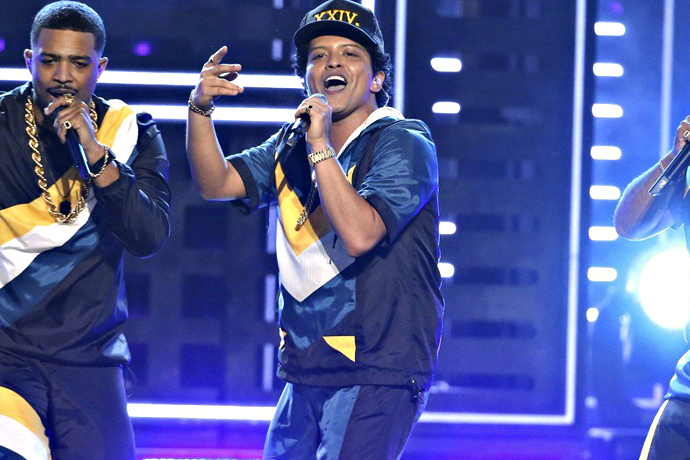 Bruno Mars’ third studio album, 24K Magic, dropped Friday featuring the incredibly catchy eponymous lead single. And since I was facing a traffic-laden, five-hour road trip that day, I decided to spend the car ride and subsequent weekend with it. After several listens, I can confidently and sincerely report: it was a good idea. Bruno Mars is the man America needs at the moment.

Yes, I am aware that Bruno is a familiar commodity. We saw him sing his face off last night at the AMAs, and we’ve seen him do the same at the SuperBowl and on SNL. But I’m not exactly sure any of it garnered the respect or attention it deserved. Sure, his albums tend to lack the energy of his live shows, and I’ve never really enjoyed his earlier stuff, either. But let me tell you something about Bruno Mars in 2016: Bruno Mars is fucking perfect.

In an era of exhausting radio hits saturated with high bpm counts and jarring synth leads in lieu of lyrical hooks, it’s refreshing to hear something reminiscent of Michael Jackson, Lionel Ritchie and Zapp & Roger.

The second single, “Versace on the Floor,” makes me physically float off of the couch with each listen.

The funky, ’90s-drenched seventh track, “Calling All My Lovelies,” had me dialing up all of my mains until my mom and Mimi had to eventually block my number.

And of course, the inescapable “24K Magic” can turn any ordinary wine and cheese party into a rumpus room of robots, power-downs and shoulder-shimmies.

It’s unabashedly fun, extravagant and easy during a time that isn’t any of those things right now. It’s as if Bruno just wants us to be happy. In a weird time where it might seem difficult to love any public figure at all, we should all agree that it is time to unconditionally love Bruno Mars.