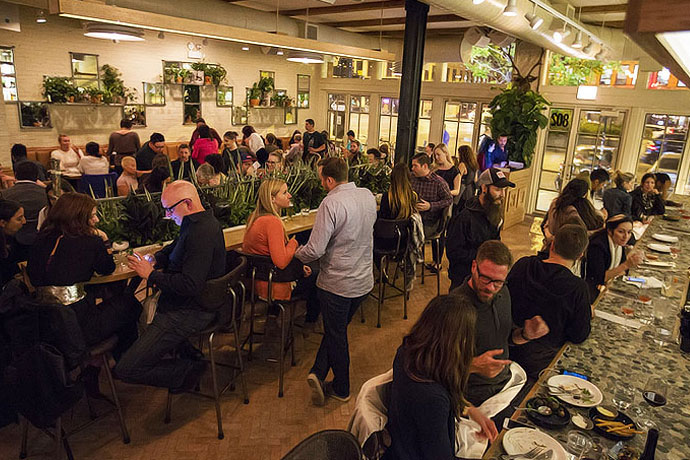 15 Photos Bad Hunter
Bad Hunter, the inventive new veggie-focused neighborhood joint from the Pub Royale people, opened Wednesday night on Randolph Row. It was eventful. There was mirth. There were gin popsicles.

And this, more or less, is what happened...

Guests arrived to find a warm, garden-like atmosphere. A tan leather banquette lined one wall; the other side contained a bar, the top of which had been covered, mosaic-style, with flat river stones. An orange glow beckoned from the kitchen’s hearth.

Those amongst friends made for the banquette, where they discovered both a standard menu and a market-based menu, which is curated weekly. Someone ordered the butter-and-mushroom dumplings. Someone else requested the double-patty veggie burger with bacon.

“All veggie burgers should be so ironic,” that someone remarked.

Those on casual dates sidled up to the island seating wrapped around a plant trough. They split the beet tartare, enriched with crème fraîche and anchovy, as well as the harissa lamb chops.

“I bet this place would be great for lunch,” one of them said.

“Good thing they’ll be doing that later this month,” the other replied.

Finally, those looking for a late-night drink hit the bar for margarita-like carrot coolers and smoky vermouth-and-rum libations.

Of particular note: they did not pass up those fruity gin popsicles.