Two Books Are Jockeying for Position in Your Kindle Queue

Which Tragicomic New Novel Should You Read First? 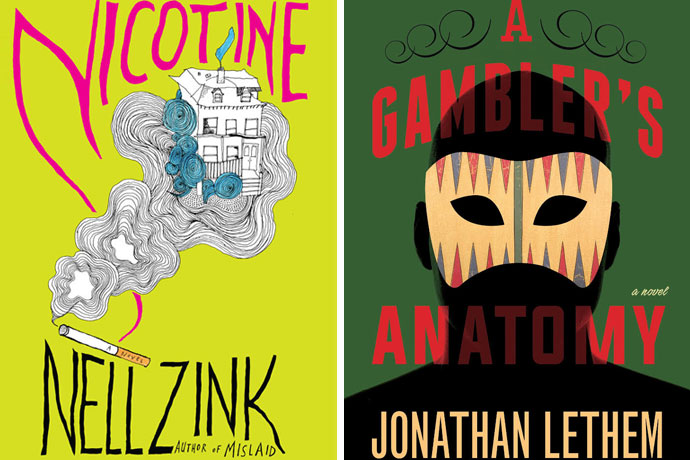 Two much-anticipated new novels are jockeying for position on your coveted bedside table and/or in your Kindle queue: Nicotine by expatriated writer Nell Zink, which officially comes out today, and A Gambler’s Anatomy by popular Brooklyn-born novelist and critic Jonathan Lethem, which comes out October 18.

And while it’s totally plausible for you to read both this month, we’ll presume that, what with all those fall TV shows and having to go on living your life as a normal, socializing human being, you only have time for one.

So let’s break them down and see what happens...

Author Pedigree
Nicotine: Nell Zink has the sort of backstory that’s hard for literati (who are actual people, I think) to resist: an expatriate living in Berlin, she was plucked from obscurity by Jonathan Franzen at the age of 50—and has already written three novels in the 18 months since. Apparently, she wrote her first, a sub-200-page oddity called The Wallcreeper, in three weeks. Her second, Mislaid, was longlisted for the National Book Award. Even her name seems tailor-made for “idiosyncratic writer.”
A Gambler’s Anatomy: Lethem has been about as prominent a figure as a fiction writer can be nowadays, with several best-selling novels, a MacArthur Fellowship and a book of essays and criticisms, The Ecstasy of Influence, whose titular piece on the realpolitik of plagiarism will no doubt be studied by the type of liberal arts students who use the phrase “realpolitik of plagiarism” for years to come.

The Plot
Nicotine: Recent college graduate inherits father’s childhood home, subsequently finds various squatters living there in support of absurd causes like “smoker’s rights,” participates in love quadrangle and is forced to choose between old family and new. More or less.
A Gambler’s Anatomy: A globe-trotting, telepathic backgammon swindler—a “default masculine blur,” as he is called in this New Yorker excerpt—grapples with existential questions, a streak of bad gambles and a face tumor. Weird.

Judging These Books by Their Cover
Nicotine: Smoke from a dangling cigarette billows into a zany thought bubble of sorts depicting a funky mansion. Mysterious, bizarre, fanciful, colorful—generally Zink-ish.
A Gambler’s Anatomy: A silhouette of the protagonist with a mask over his eyes set against a forest-green background. Calling into question notions of personal identity, we guess.

The Early Reviews
Nicotine: “Zink’s novels, while undeniably excellent, are so strange that it is hard to understand why anybody actually likes them.”
A Gambler’s Anatomy: “Nothing is ever exactly as it seems.”

An Unsolicited Personal Take
Nicotine: Zink is, without a doubt, a quote-unquote (but actually, sincerely) authentic new voice in American fiction. Reading The Wallcreeper was unlike any other experience I’d had reading anything, before or since. She has a dark, jarring sense of humor, with punch lines that have a way of sneaking up on you. While she can be gratingly erudite, the fact that this book is being published alongside another book, Private Novelist, parts of which were written exclusively for a friend and never meant for publication, has piqued my interest. I also find “smoker’s rights” squatters a particularly clever, zeitgeist-y image.
A Gambler’s Anatomy: Lethem has a flair for dialogue and character that gives his books a certain “unputdownable” quality. As is apparent with this new one, he’s known to deploy a quirky brand of science fiction, which, combined with a penchant for big ideas, rewards readers who want to think critically without punishing those who just want to be entertained.