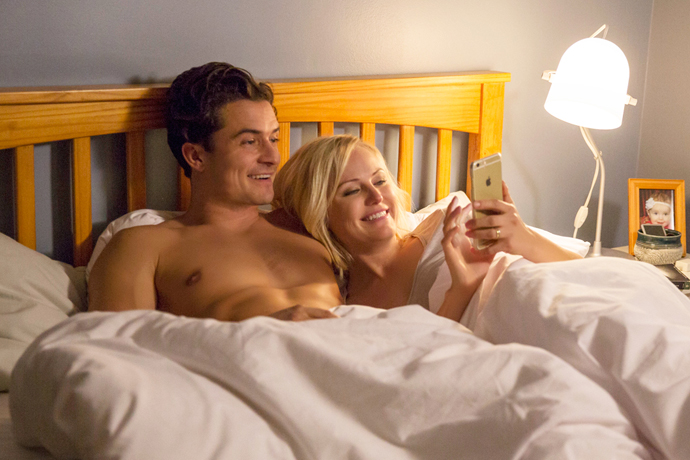 Now that the Emmys are over, we’d like to direct your attention to more pressing matters: fall TV.

Let’s see what you’ve got.

You’ve got the return of one very laudable family dramedy, Amazon’s Transparent.

You’ve got basic cable’s campaign to destroy seemingly every pop cultural artifact you hold near and dear, what with Damon Wayans’s Lethal Weapon, a new Exorcist and a post-MacGruber reboot of MacGyver.

And though you may not know it yet, you’ve also got Easy—Joe Swanberg’s series of eight half-hour vignettes about modern love in Chicago. It premieres Thursday on Netflix, and includes Dave Franco, Orlando Bloom, Malin Akerman and Emily Ratajkowski within its cast.

If you’re unfamiliar with Swanberg, he’s the director of more than 20 feature-length films. Most of them are pretty hard to find, which explains why you may be unfamiliar with Swanberg. His three most recent movies—Drinking Buddies, Happy Christmas and last year’s Digging for Fire—have made him the sort of filmmaker for whom Brie Larson was more than happy to dye her hair purple.

As with Easy, all three of those movies are, more or less, meditations on “modern love.” Though they’re also meditations on thirtysomethings reckoning with the notion of parenthood, Jake Johnson drinking craft beer and Anna Kendrick having significantly more fun than she ever had in Up in the Air.

All of which is to say that we’re greatly looking forward to this new project. So much so that we called Swanberg up to chat about the series.

And beer. We also chatted about beer.

How did this show come about? Did you cast people first or write certain episodes with actors in mind or...
I pitched it to Netflix as basically a chance to keep making work the way I have been with eight short films. Though some of these characters would know each other, and there would be these bits of overlap between some of the episodes, where we would see people show up in different storylines. I was able to work with some people I worked with before, and some people who I knew personally but hadn’t worked with. It’s always cast specific to the episode, but the way that I work, once the actors get cast, they bring a lot of themselves to it and kind of take ownership of it.

Was there anyone you haven’t worked with before who you were really excited to work with on this?
Dave Franco and I have known each other for a few years and have been trying to find a project to work together on. I was so happy it finally lined up, in that I had a character he was interested in playing in a format that worked out for our schedules and everything else.

Marc Maron, too—I had done his podcast, and kind of knew he’d be interesting and open to working this way.

You seem to be one of those guys, judging by your last few films and this new show, whom interesting actors want to work with. What’s your secret?
I wouldn’t say I have a secret, but I think after I did Drinking Buddies—having Olivia Wilde and Anna Kendrick and Jake Johnson as advocates for the working method—made [casting] a really different experience. Beyond that, I just really love and respect the actors I get to work with, and I’ve acted enough myself in other people’s films to know how hard it is and how vulnerable you are as a performer. I’m sensitive to that. And ideally, I’m providing actors opportunities to do work they don’t get to do all the time. I don’t come to these stories with hard-line, specific things that I need, so there’s a lot of freedom to shape these characters in interesting ways. A lot of actors [are] pigeonholed in a certain way, and I think my movies are often an escape from that.

I understand you use a lot of improv in your films. Is there a difference between the type of improv you engender on set and the type of riff-based improv you’d see in, say, a Judd Apatow movie?
From what I know of Apatow, in many ways his joke writing and a lot of the improv that’s happening on set is based on comedians being able to riff with each other or create a lot of alternate jokes for a scene. For my stuff, it’s more of a dramatic improv. It’s not based around joke writing or coming up with alternative punch lines. It’s much more about using the improv to allow a scene to unfold more naturally. Hopefully, it’s an alive and spontaneous feeling, and you’re engaged watching actors be engaged with each other.

There are more than several very good-looking stars in this show. Do the beautiful have the same problems in relationships as us average-looking people (“us” as in “me”)?
Well, of course. I think it’s a little easier to get through life if you’re good-looking, but it doesn’t solve all of your problems and creates all kinds of new ones.

Like?
In terms of these actual actors, I’ve come to see fame as a curse, not a blessing. It really limits the way you get to experience the world. You and I get to basically walk into any situation and deal with it at face value, but if you’re a really famous, recognizable actor—it’s not necessarily that you want to be sheltered, but you’re treated differently by everyone you encounter and that makes you treat the world differently. I think it gets very complicated very quickly.

I feel like half the people I talk to say dating is easier than ever and half say it’s harder than ever—what’s your take?
I’ll split the difference between those viewpoints and say I don’t think it ever gets easier or harder, I just think it changes. I’ve been out of the game for a really long time, but I would say I’m pretty envious of single people, in terms of a lot of the technology that seems really fun. Just in terms of casual sex and that side of dating. In terms of finding a real connection with somebody, I don’t think that ever gets any easier. You’re still looking for needles in haystacks. I don’t know if any amount of technology solves that problem.

In your opinion, what makes a really good sex scene?
For me, it’s less about what’s happening in the sex scene or how sexy it is. I’m always much more interested in watching scenes where the performers feel connected to each other, and often that’s the opposite of a sort of Cinemax-y, soft-focus, candlelit sex scene. I like sex scenes where characters laugh, talk to each other in the middle, fumble around trying to take their clothes off.

What speaks to you about Chicago versus New York or LA? Why does it lend itself so well to the stories you’re trying to tell?
My feeling is that Chicago is a pretty segregated, neighborhood-y type city, so maybe the anthology format can capture different parts of the city. But, you know, it’s always tough to tell. Ideally, the show has universal feeling and isn’t so focused on its Chicagoness that it feels exclusive. At the same time, Chicago really is a specific city and I think Midwesterners are a specific kind of people. I just want to do a good job capturing that. There are so many New York or LA shows. Modern Chicago is not as heavily represented, so there’s a little more freedom to shoot in places that aren’t totally overexposed.

Judging from Drinking Buddies and Digging for Fire, it seems like Jake Johnson has an unlimited capacity for beer. Is this true?
He’s not as big a drinker as my movies make him out to be [laughs]. Jake’s typically my beer stand-in—I probably drink five times the amount of beer Jake drinks. But he is a proud Chicagoan, so he’s always happy to represent my favorite breweries. I’m always happy to put cool beers in his hands while we’re making movies.