Female Ghostbusters. Channing Tatum as a Mermaid. And Now... These? 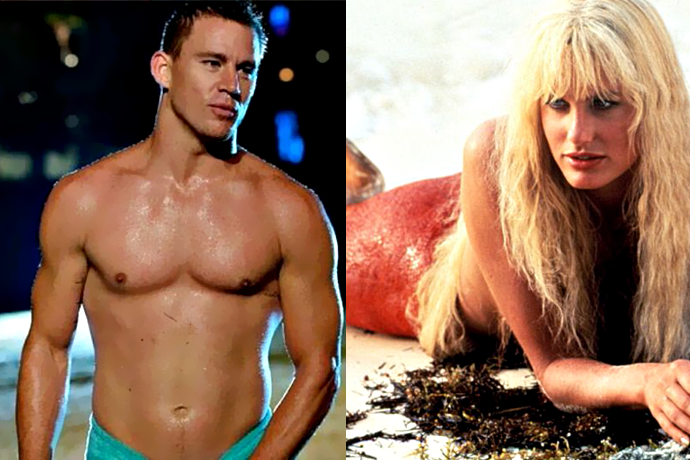 Yeah, Hollywood’s still out of ideas.

Still, the world got a little better when Kate McKinnon became an unhinged Ghostbuster, and the news that Channing Tatum will take on Daryl Hannah’s iconic Splash role... makes a weird kind of perfect sense, actually?

So if all we’re going to do is remake iconic ’80s and ’90s movies now, wrapping “new” offerings in the warm nostalgia of a simpler time (but with a twist!), there might be some level of genius at work in the current swap-the-gender-of-the-iconic-role trend.

Speaking of which, we’ve got some ideas for redos we’d like to see greenlit immediately.

The film: Gleaming the Cube.
The star: Miley Cyrus.
Critical update: “The cube” is also played by Cyrus.

The film: Say Anything...
The star: Ellen Page as Lloyd.
Critical update: She’s hoisting up an iPhone, not a boombox.

The film: Beetlejuice.
The star: Kristen Schaal.
Critical update: Jonah Hill and James Franco take on the roles of the recently deceased married couple, trying to scare away gentrifying hipsters from their Craftsman.

The film: Lethal Weapon.
The stars: Abbi Jacobson and Ilana Glazer.
Critical update: This time, it’s Riggs who’s too old for this shit.

The film: When Harry Met Sally...
The stars: Alison Brie as Harriet, Adam Devine as Sal.
Critical update: Adam Devine, faking it. That is all.

The film: Weekend at Bernie’s.
The stars: Emma Stone takes over for Andrew McCarthy, Lea Michele subs for Jonathan Silverman... and Tilda Swinton plays Bernice Lomax. Yes, this is Weekend at Bernice’s.
Critical update: That would be Ms. Swinton.

The film: Top Gun.
The stars: Anna Kendrick as Maverick, Taylor Schilling as Goose.
Critical update: In a next-level, multi-platform release move, the Broadway adaptation of the remake opens same-day.

The film: Weird Science.
The stars: Kendall and Kylie Jenner as the awkward teens. Hey, it’s a business.
Critical update: The role of Kelly LeBrock shall be played by Zac Efron.

The film: Pretty Woman.
The stars: Ryan Gosling and Meryl Streep.
Critical update: Pretty Man remains a working title, and will be vetted in 359 focus groups.