The Greatest Show on Earth Is Returning Tonight: Bachelor in Paradise

Precapping the Best Thing That’s Happened to Summer Since It Happened Last Summer... 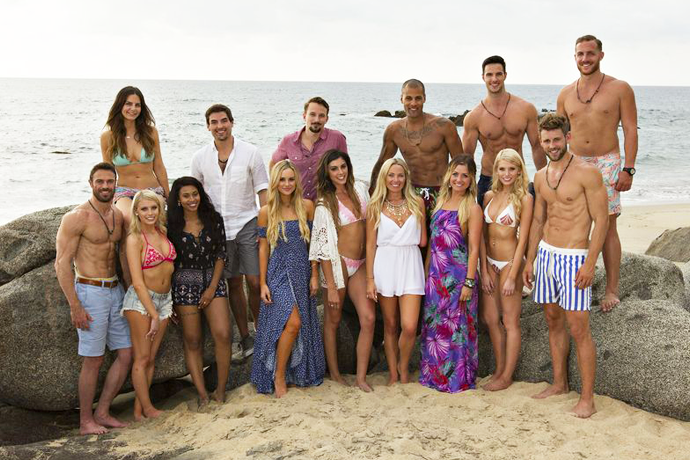 Two writers, Sam Eichner and Najib Benouar, just couldn’t contain their excitement over the premiere of summer’s most anticipated show: Bachelor in Paradise. Having exhausted their peers, their family and their friends, they took to recording their thoughts here. Sorry. Also, you’re welcome.

Sam Eichner: The Bachelorette is over. I haven’t watched last night’s finale yet, but will go ahead and assume that JoJo chose Aaron Rodgers’s beguiling, floppy-haired younger brother, Jordan, because she can’t resist a bad boy athlete in a well-fitting leather jacket. Also, Robby is the former-swimmer equivalent of—***DEEP-CUT WARNING***—Brendan Fraser in Bedazzled after he asks the devil to make him the most sensitive and emotional man in the world. Najib can confirm or deny this assumption. Or I can look literally anywhere on the Internet. Either way, let’s close the book on this season, wish JoJo and whoever happily-[six-months-at-most]-after and move on to more important matters...

Namely, Bachelor in Paradise. It premieres tonight, and it’s the best thing to happen to summer since last summer, when it happened before.

For those of you who don’t know, BiP is where select former Bachelor and Bachelorette contestants go when they’re kicked off their respective shows to enjoy a three-week-long afterlife uninhibited by hand-job-obstructing notions of “finding true love.” There are no real rules; there is no real endgame. As a lovelorn soul marooned on the shores of some Mexican beach, your only goal is to drink tequila, hang around bonfires and couple up for as long as you can before someone more desirable comes along or Chris Harrison calmly but firmly asks you to leave.

BiP is what The Bachelor would be, were it to indulge its basest instincts. On its face it represents the continued pursuit of the modern fairy-tale sort of love so integral to the franchise’s survival, but deep down it is just a slightly classier iteration of ElimiDate.

Najib Benouar: A: Well put.
B: Thanks for making me think of Bedazzled for the first time in over a decade. Shout-out to TV Free Agency dark horse Brendan Fraser.
C: Yep, Lil’ Rodgers won.
D: Welcome to paradise. Let’s do this.

First, I’d like to make an amend to your BiP recipe: there’s also a pinch of Survivor sprinkled in there with the gamesmanship of having to get one of the finite “interest roses” from whoever’s doling them out to make it into the next round. There’s some early low-key alliance making and hedging that goes down, which obviously Daniel “the Canadian sidekick” Maguire will be involved in almost exclusively until he gets double-crossed (by the twins? would that be quadruple-crossed?). Of course, we’ll also need to add the one seasoning that improves every recipe: an unhealthy dose of saltiness.

SE: Good call. There is definitely some Survivor in there—Jeff Probst is really just Chris Harrison in a jungle—and your “saltiness” double entendre will not go overlooked. Now, where to begin?

NB: I think the teaser promo really sets the scene.

Let’s break it down.

00:20—First Chad sighting: Chad looking as vulnerable as he ever has, trust-falling into the ocean after being playfully pushed by a bikini-clad woman during a late-night beach rendezvous.

00:22—Firefighter Grant caught with his pants down by a night-vision camera. Well, figuratively speaking. He’s in a bed (possibly fully clothed) with a woman (Lace?) who seems to be acting guilty when they see a camera spying on them.

SE: This must be a sophisticated camera trick, because there’s just no way.

NB: Could’ve just been an educational thing related to his expertise.

00:25—Daniel the Canadian being ridden like a donkey. Surprisingly, the least sexual thing they’ve shown yet.

00:30-00:37—Tears. So many tears from so many people in this supercut. Even Vinny? Sweet Vinny the Barber, who everyone loves, in a friend-zone way? Chad must have really lost it...

00:38-1:02—A whirlwind of clips of Chad saying he “brought so much proteeeein” and picking fights with people. Cue: “Hurricane Chad hit really, really hard.” So perfect. He was predestined for that name.

SE: Interjecting here to say I’m sitting alone at a Costa Coffee across the street from a Holiday Inn Express in a drab London suburb, as rain streaks down the windowpane, watching this clip and muttering to myself, “This is epic,” over and over again.

NB: 02:59—Sorry, I was whooping and hollering, like Arsenio Hall just walked out on stage in 1993, for the last minute and 44 seconds until the very end when they announced there will be a finale with multiple marriage proposals. (So, two?) Chris Harrison, you a fool for this one.

Sam, as our resident Bachelor Nation scholar, I’ve got a theory to bounce off you: for all of BiP’s Mr. Hyde–ness to The Bachelor/ette’s Dr. Jekyll, this show actually might be the better matchmaker. There’s a more even playing field (not the 25–28:1 ratio of the main show), and the looser feel of Chris Harrison’s island of misfits allows people to get to know each other better, more quickly. Ultimately, it’s slightly more like real dating, of the two shows. Two seasons in and there’s already been a few real matches and even a marriage. Which is a better batting average than the main show.

SE: I hate that you’re right. The irony is bittersweet. If it were up to me, nobody would ever find love and everyone in paradise would be doomed to make the same romantic mistakes for all of eternity. Is that so much to ask? Anyway, let’s move on before I get too upset... Got any predictions? Who do you want to see get together?

NB: I’m not going to lie, Caila and Jared might be the greatest OMFOPBRTMFEO (Originally Meant for Other People but Really Truly Meant for Each Other) couple on earth. I’m on board.

I’m also cautiously optimistic about a possible coupling of Amanda the single mom and Nick the human slide-into-your-DMs. I also kind of like that one in a guardedly hopeful way. We want to believe in you, Nick. Let us believe in you.

Most likely to get shown the door, sternly, by Harrison: Chad.

Most likely to try to hook up with the twins and fail spectacularly: The Canadian.

Most likely to talk to an animal or inanimate object on multiple occasions: Lace Morris.

Most likely to slide through a few rounds and end up going much farther than expected, if only to just cut the other guys’ hair and save ABC some cash: Vinny.

Most left-field couple that was shown really hitting it off in the promo: Wells and Ashley. Wells, who are you anymore? This either makes no sense or too much sense. Need to see more.

Most likely to actually find true love: Jared and Caila. Like I said, OMFOPBRTMFEO.

SE: I’m with you on all of those, except the Vinny thing. I can’t in good faith get behind Vinny. Speaking of which, see below.

15. Sarah Herron: Hard to dis Sarah, because she only has one arm and everyone automatically assumes said dis has something to do with that fact. But, really, she just comes off as airheaded and dull. Regardless, I’m sorry.

12. Leah Block: Most famous for bad-talking Lauren to Bachelor Ben Higgins in what was likely a direct bid for Paradise. Congrats, Leah. You made it.

11. Lace Morris: Most famous for being batshit crazy to Bachelor Ben Higgins in what was likely an indirect bid for Paradise. Be careful, Lace. You made it.

10. Amanda Stanton: Anyone who entertains a relationship with Nick Viall is entertaining.

9. Jared Haibon: We know Ashley I./Kim Kardashian–Lite is making an appearance to thwart Jared’s happily-ever-after with Caila (who’s also not in the original cast, but in the promo).

8 and 7. Emily and Haley Ferguson: These twins were made for reality TV/ill-advised threesomes with Canadians.

6. Chris Harrison: He’s not a contestant, but he snags the sixth spot anyway, because he’s Chris Motherfucking Harrison.

4. Jubilee Sharpe: I missed Jubilee. I’m also secretly hoping the paradise gods will spurn her from the gates of heaven-hell and give her a second life on The Bachelor/ette.

3. Daniel Maguire: Most likely to get surreptitiously fondled in a hot tub by a set of identical twins. Make Canada proud/ashamed.

2. Chad Johnson: Goes without saying. He says “Fuck you” to Chris Harrison, and is bona fide crazy.

1. Nick Viall: You’re probably wondering how Nick Viall earned the number one spot here over Chad. It’s a reasonable thing to wonder. But let’s look at the facts: Nick Viall was runner-up not once but twice on The Bachelorette, looking and talking and modeling like Nick Viall. He started a “social media relationship” with Kaitlyn Bristowe before single-handedly hijacking her season of The Bachelorette to (almost) defeat Shawn Booth. People simply do not understand where he lies on the villain-to-hero spectrum. I spotted him killing it on a date once at Bar Siena in Chicago, and they make great pizza.

Bottom line is, Viall is a wily vet who enjoys pizza and knows how to play the game. And BiP is nothing if not a game.