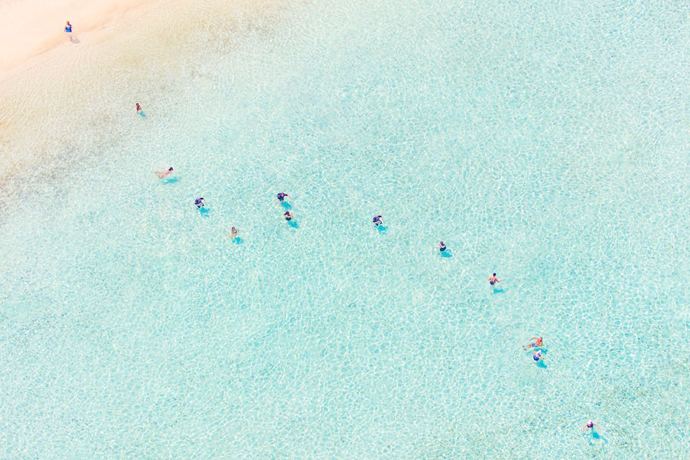 Gray Malin Bora Bora Aerials
“Gray Malin is from Dallas. I am from Dallas. His first name is Gray. My last name is Gray. Somehow, we are not friends. (Yet.) But his aerial photography work is something I’ve long admired from afar. And his new collection of tranquil waterscapes in Bora Bora is something that I might want to admire from inside my house. Maybe right above my living room couch. At the very least, it’s got me looking up flights to Bora Bora.” —Kevin Gray

All or Nothing: A Season with the Arizona Cardinals
“Most Important Reasons to Have an Amazon Prime Subscription:
#1: This streaming eight-episode look into the 2015 Arizona Cardinals season that is funny, poignant, captivating, groundbreaking and the best thing NFL Films has done since the VHS halcyon days of NFL Rocks.
#2: Free two-day shipping.” —Adam Weinberg

More Perfect
“A spin-off of Radiolab, this podcast is exclusively about the US Supreme Court and its cases. I know that sounds terribly boring, and ultra-niche, but it’s fascinating to see how the decisions of a couple of (highly educated) jerks in a (really nice) room affect the lives of people far beyond them. I mean, did you know the Supreme Court only had six justices and barely held any power when the country started? Of course you didn’t because you haven’t heard this episode. I know it seems like the last thing you need right now is more politics, but this is... different.” —Nathan Wahl

“The Abandonment” by Joshua Ferris
“Ferris is one of those authors I keep meaning to read but never quite get around to, so I was happy to stumble upon his latest short story (he’s coming out with a collection next year) as I was making my precursory rounds on The New Yorker’s homepage before bed last night. This is a classic New Yorker story—some words and phrases to describe it might include ‘creative class,’ ‘ennui,’ ‘neuroticism,’ ‘witty’ and ‘upper-middle-class relationship drama’—but one that’s executed exceptionally well. Without giving too much away, it centers on a somewhat successful screen actor with a deep-seated fear of abandonment who believes his wife has left him. It’s funny, in a loony sort of way, and frequently surprising, too. At one pivotal moment, you will feel a knowing grin spread across your face. Suffice it to say, if you only read one short story this summer, let it be this one.” —Sam Eichner

The Good Thing About Having a Phone You Hate
“A lot of people get flustered and claim to want to give up their phone for a while. That’s impractical. The solution to using your phone too much is to get a phone that you loathe. I shattered my iPhone recently to the point where it was cutting me. Luckily, I had a backup phone that my friend had given me a year or so ago (yeah, we’re the ‘giving each other phones’ kind of friends). It’s an HTC something or other with Android, and I hate everything about it. Partly that’s because I’ve been dumbed down by the Apple products I’ve been using since the first iMac days—products that ‘just work.’ The other part is because it’s awful. Still, I haven’t repaired or replaced the iPhone yet. Why? Because I’m free. When you hate your phone like I hate this one, you tend to only use it when necessary. And when I walk around the city, I’m free to look at all the interesting faces, buried in their phones.” —Geoff Rynex