Why BoJack Horseman Is the Most Important Show on TV

One Final Plea to Get on the Bandwagon 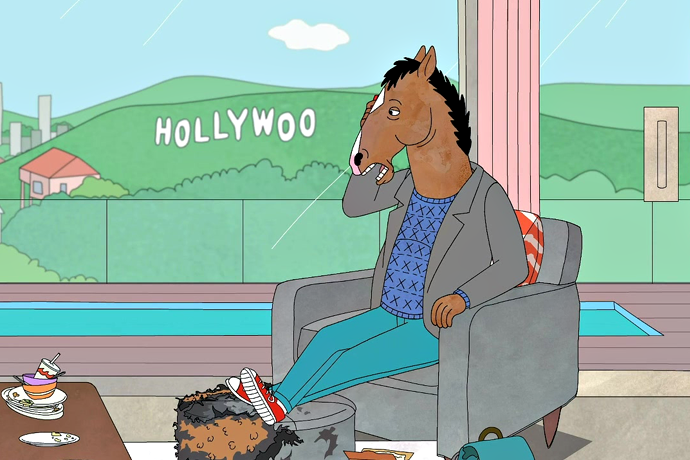 Hey, look at that. You opened up the post with the controversial hyperbolic headline. Now that you’re here, we’ll reward your trust with a breakdown of why BoJack, the Netflix-produced series that will deliver a third season tomorrow, is worth your time, and why it deserves a place next to the Mad Mens and the Better Call Sauls of the world.

If you haven’t watched by now, you probably haven’t read the many exegeses written on BoJack’s expert balance of high and low comedy with sadness and poignancy, so let’s take it as a given that it achieves that, and here’s the somewhat lengthy elevator pitch: it’s a show about a washed-up horse who starred in a ’90s sitcom.

It’s set in a world and version of Hollywoo(d) where animals and people are the same. BoJack (voiced by Will Arnett) has a shiftless permanent houseguest who’s a human (Aaron Paul), an agent/sometimes-girlfriend (Amy Sedaris) who’s a cat, and an old acting rival who’s a golden retriever (Paul F. Tompkins) married to a human woman (Alison Brie) who ghostwrote BoJack’s memoirs. It’s what they call an adult cartoon, which is where it loses a lot of people right off the bat.

So for those who simply won’t watch a cartoon, fine. Your loss. For those who treasured the nuance of every Don Draper forehead scrunch, but also enjoy vicious sarcasm and the occasional horse sex gag, come on in, water’s perfect.

As a bonus, they’ll throw in an overdose of Easter eggs like an actual shark playing pool in the background at a bar or a stifled writer getting creative over an “MSNBSea” ticker (“U.N. DECLARES WAR GOOD FOR ABSOLUTELY NOTHING, SAYS IT AGAIN”).

It’s because it’s animated that a show like this can get away with such a wider range of things than any live-action prestige program ever could. BoJack Horseman is free of constraint because it believes in nothing but itself, its characters and the possibility of meaninglessness.

Which is where we come to the absurd. That word is thrown around a lot in reference to BoJack, mostly about its comedy. And that’s accurate. A recurring gag about BoJack’s agent, the lonely, workaholic cat, Princess Carolyn, dating a man who is very clearly three boys stacked on top of each other in a trench coat, belongs squarely in that theatrical category. But it’s not just the ludicrous guffaw moments that are absurd.

There’s an arc in season 1 where BoJack gets into a televised debate with a Navy seal (who is, of course, a seal) over a box of muffins. It’s ridiculous and played for laughs, even while it questions our attitude toward the military. Later in the season, as BoJack has alienated everyone who cares about him, he gives a slow-zoom-in monologue:

“Sometimes I think I was born with a leak, and any goodness I started with just slowly spilled out of me, and now it’s all gone. And I’ll never get it back in me. It’s too late. Life is a series of closing doors, isn’t it?”

Immediately, a “man” who’s really three kids in a trench coat pets him with his/its broom hand to comfort him.

All of these elements are characteristics of the absurd—the struggle to make sense of an existence that refuses to. BoJack’s constant battle to be a good person, to have that goodness validated and to find a reason to get up in the morning are of a philosophical piece with arguing over a box of muffins, and that argument ending up on television, then becoming a commentary on our blind adulation of service members.

It’s impressive that you don’t need to realize any of this to laugh at the seal getting so worked up that it barks, or to have that monologue stay with you for a few days. But it’s more impressive that they make you realize it without you realizing you’re realizing it. Follow?

Each episode is so full of caustic outrageousness that you tend not to notice the show is really more of an existential drama than a satire or pure comedy. That’s where it separates itself from shows like The Simpsons and South Park (we’ll omit Family Guy altogether). Comedy always comes first on those, even if just narrowly. At times, BoJack bombards you with humor, but the negative space of the show is always made of something darker and more sentimental. Its weaving of its humor and its pathos is more seamless than anything else out there.

What it comes down to, then, is that BoJack is the most important show on television because of the high degree of difficulty it achieves. They’ve managed to make it enjoyable at any level of audience demand, and it’s exciting to watch the creators, animators and voice actors execute that so consistently and perfectly.