Is Julia Louis-Dreyfus the Meryl Streep of the Emmys?

Or Is Meryl Streep the Julia Louis-Dreyfus of the Oscars? 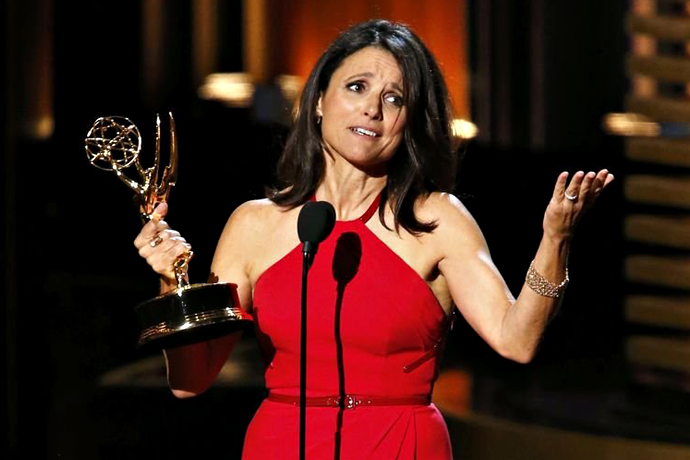 It’s not news that we live in a world where television has become more vital to our culture than the movies, even if “television” also means “the Internet,” which kind of seems like cheating, but still.

Fewer people are making pilgrimages to their local cineplexes. A Spielberg movie based on an iconic Roald Dahl novel just flopped, while everyone’s still talking about the weeks-old finale of a premium-cable show based on some fantasy books. Also, Netflix is Netflix, overstuffed with talent once considered film talent, and Amazon, too, has a season that’s a pilot season.

1980
Meryl Streep: Wins her first Academy Award for Best Supporting Actress for Kramer vs. Kramer at the age of 31.
Julia Louis-Dreyfus: Begins breaking into the acting/improv scene while studying at Northwestern University.
Historical Takeaway: Streep probably wasn’t sweating the competition just yet.

1983
Meryl Streep: Wins the Academy Award for Best Actress for Sophie’s Choice.
Julia Louis-Dreyfus: Is on Saturday Night Live, at that time the youngest female cast member in the show’s history.
Historical Takeaway: Streep’s performance in Sophie’s Choice is oft considered one of the best of all time, ever. So there’s that.

1990
Meryl Streep: Weirdly, she doesn’t get award recognition for costarring with Roseanne Barr in ’89’s She-Devil. But out comes Mike Nichols’s Postcards from the Edge, which would earn her an Oscar nomination in 1991.
Julia Louis-Dreyfus: Stars in her first episode of Seinfeld.
Historical Takeaway: Hmm, Streep’s trying out comedy. Coincidence?

1996
Meryl Streep: Nominated for The Bridges of Madison County; stars alongside Liam Neeson in a below-average Liam Neeson movie where Liam Neeson is relentlessly brooding and overly protective of his children. Go figure.
Julia Louis-Dreyfus: Wins her first Emmy for Outstanding Supporting Actress in a Comedy Series at the age of 25; bestows upon us her greatest single contribution to American pop culture: the Elaine dance.
Historical Takeaway: JL-D is younger when she wins her first major award (Streep won a Tony Award in 1976 when she was 26, and an Emmy for a role in a miniseries in 1978 when she was 29). And the indelible impact of the Elaine dance—on school dances, on kids embarrassed of their mothers at rock concerts, on everyone—is unquantifiable.

2003
Meryl Streep: Becomes the most nominated actor, male or female, in Oscar history (ahead of Katharine Hepburn and Jack Nicholson) with her Best Supporting Actress nomination for Adaptation.
Julia Louis-Dreyfus: The second season of her (and her husband’s) slice-of-life sitcom, Watching Ellie, gets canceled.
Historical Takeaway: The Cult of Streep—as the can-do-no-wrong greatest actress of our generation—can be, retrospectively at least, pinpointed to this nomination. Julia Louis-Dreyfus, on the other hand... well, a post-Seinfeld lag was to be expected.

2006
Meryl Streep: Stars in The Devil Wears Prada, which would garner her a Best Actress nomination the following year.
Julia Louis-Dreyfus: Wins her first Emmy for Outstanding Lead Actress in a Comedy Series for The New Adventures of Old Christine.
Historical Takeaway: Things are heating up. Kind of.

2010
Meryl Streep: Nominated for Best Actress for Julie & Julia.
Julia Louis-Dreyfus: Nominated for Outstanding Lead Actress in a Comedy Series for The New Adventures of Old Christine. For the fifth year in a row.
Historical Takeaway: Things are really heating up. Still kind of. Everyone starts whispering, “Is Streep trying to edge in on Louis-Dreyfus with all these comedic roles?” What, you don’t remember those conversations?

2012
Meryl Streep: Wins her third Oscar (second for Best Actress) for her spot-on portrayal of Margaret Thatcher in The Iron Lady.
Julia Louis-Dreyfus: Wins her third Emmy for her lead role in HBO’s Veep.
Historical Takeaway: This was a big year for both Streep and Louis-Dreyfus. Streep became only the fifth actor (Daniel Day-Lewis has since made it six) to win at least three acting Oscars. Only Katharine Hepburn has more total wins (four). JL-D, on the other hand, well, see below. She’s about to tear things up.

2016
Meryl Streep: She’s playing the titular role in the upcoming Florence Foster Jenkins alongside Hugh Grant. It’s based on the true story of a New York heiress who wants to be an opera singer, despite a notable lack of talent. Those who star for director Stephen Frears tend to do well come Oscar-nom time, even if their last name isn’t Streep. Hers is, though.
Julia Louis-Dreyfus: She’s been on a tear, defeating a formidable opponent (Amy Poehler) for the Emmy three years in a row since 2012. For context, no other lead actor or actress in a comedy or drama has ever won four consecutive times. And yeah, she will likely be nominated again for Veep come Thursday.
Historical Takeaway: If she’s nominated this year for Veep, Louis-Dreyfus will tie Mary Tyler Moore for most nominations for Outstanding Lead Actress in a Comedy Series. Within the eight main acting categories (including supporting actors and actresses for comedy/drama), only David Hyde Pierce has more (11). If she wins this year for Veep, she’ll have more Emmys for an Outstanding Lead than any actor/actress in Emmy history (Don Knotts has five for The Andy Griffith Show, but as a supporting actor).

Yes, Meryl Streep is Meryl Streep. She’s been nominated seven more times (!) than any other actor or actress in history. She’s one of the best technical screen actresses of our generation, if not all time. She was in It’s Complicated, which I never saw. She is a paragon of grace and womanhood and everything that is pure and magical about acting. Maybe she can heal people with her touch. This is unconfirmed.

But can we say anything less of Julia Louis-Dreyfus? Are her accomplishments—being nominated six straight times for Seinfeld, four straight times for The New Adventures of Old Christine and four straight times (with four straight wins) for Veep, in the space of about 25 years—any less significant, in an era where movies are stuck playing second fiddle to HBO and Netflix and even TNT and USA? Is the depth of her comedy—the precision, the timing, the control with which she brings herself to the edge of sanity and back—any less substantial?

We say, defiantly, no. As television continues to surpass film, so too does JL-D continue to surpass, or, okay, draw herself alongside Queen Streep.

And so we must now ask ourselves: how long can it be, really, before Streep does Netflix?