Some Thoughts on Last Night’s Premiere of Any Given Wednesday

As a longtime fan of the Simmons Universe—his podcasts, his stable of writers and critics, his unabashed proclivity toward reality TV—I had my fair share of high expectations.

The Opening Monologue Re: LeBron
To be honest, I would’ve rather read this in a column than heard/watched it as a monologue. It wasn’t bad, or unintelligent, or uncreative. But some of the jokes fell flat, because 1) Simmons isn’t a comedian (not that he necessarily tries to be), and 2) sports jokes just aren’t that funny. Or at least they aren’t to me. I don’t know. It’s a tough balancing act, and the goofy, sometimes cheeseball-level graphics didn’t help.

Can We Talk About Bill Simmons’s Outfit? 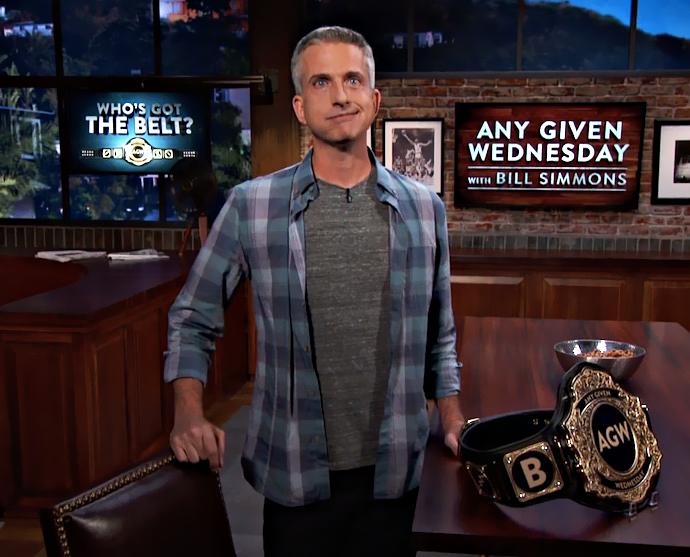 Plaid shirt over gray T-shirt, tailored jeans (cuffed up, I may add) and some dressy-casual sneakers. He looks like your friend’s cool dad—who talked to you about girls without being weird, dished about sports and let you get away with smoking pot—if your friend’s cool dad wasn’t a lawyer or an accountant but instead had his own talk show on HBO. Obviously, this isn’t a coincidence. Though it boggles the mind to consider the mammoth amount of premeditated calculation (the meetings, the memos, the harshly worded inter-office emails) that must’ve gone into building an outfit designed to suggest the exact opposite.

The Big Picture with Charles Barkley
Wherein Simmons talks basketball with Charles Barkley, and Charles Barkley delivers this gem: “Y’all just make up names. There’s no such thing as a millennial.” There’s also a discussion about the top 10 players of all time, which any Simmons reader/listener will recognize as well-trod territory. It’s one of his pet topics (along with Deflategate, the Celtics and airplane movies), but one that never really gets old for me. This was my favorite segment of the first episode—an in-depth discussion of the Larry Bird/Dr. J fight, how much Barkley was fined over the course of his career (“half a million”) and the pratfalls of “hero ball” is enough to justify Simmons having his own show. 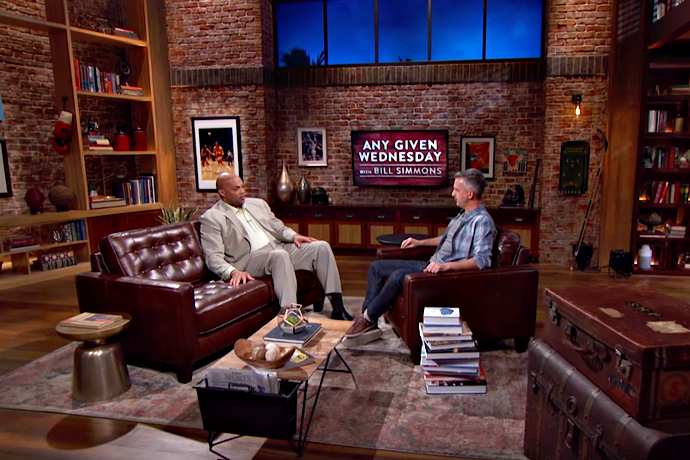 It’s a den (nay, loft) of exposed brick, dark-brown leather recliners, framed sports photos, decorative bookshelves and glass scotch decanters. If this is the visual reification of Bill Simmons’s heretofore audio-and-text-based universe, it’s a universe I want to spend some time in, playing poker and getting whiskey-drunk enough to discuss NBA esoterica at a depth for which I’m desperately unequipped.

That Steph Curry Commercial Bit
A critique of Steph Curry’s commercials based on the thesis that basketball stars’ commercials either have to be really cool or really ridiculous to work. I buy it. And the fake commercial they made for Curry was pretty funny.

Seriously, Someone Tell Me WTF Is Going On with Ben Affleck 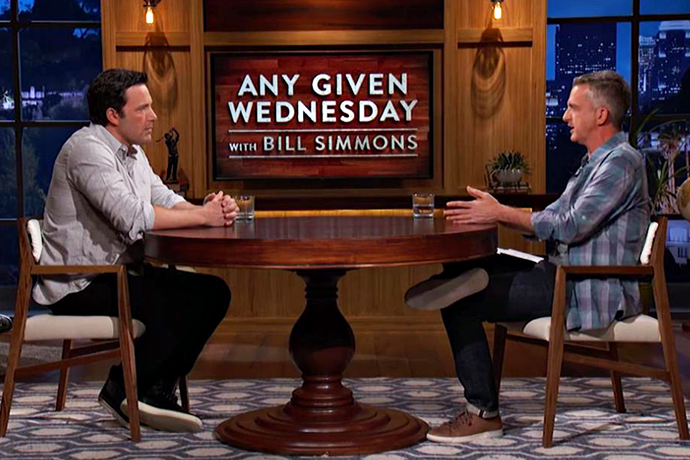 Simmons’s one-on-one with Affleck was where things got weird. It’s not difficult to imagine HBO deciding to grant their golden boy some redemptive press after the whole Jennifer Garner/Vanity Fair debacle, especially when the whole first half of the interview becomes a platform from which Affleck is allowed to spew an uninterrupted stream of self-deprecating shtick on failure with a Gone Girl level of casual duplicity. Eventually, Simmons transitions the conversation to Deflategate, and Affleck goes off on an unhinged, F-bomb-ridden rant on the overstep of the NFL and the classiness of Tom Brady. Which I’m cool with, except... what was wrong with Ben Affleck’s voice? It looked like half his mouth had stopped working. He sounded like someone drunk trying not to sound drunk, and actually sort of succeeding. Watch this and tell me I’m wrong. Please. I’ll sleep better at night knowing Ben Affleck’s health and well-being are intact, even if it means I’m subconsciously projecting hints of impropriety onto unsuspecting celebrities.

Some Hopes for the Future of This Show, in No Particular Order
I hope there’s more roundtable conversation, instead of one-on-one interviews; I hope there’s some experimental integration with The Ringer, à la The New Yorker and Vice; I hope there’s more pop culture coverage, particularly that which incorporates some of the more random coverage popping up on The Ringer lately—involving old rom-coms, reality TV and this downright genius work of criticism on Jennifer Garner’s Capital One commercials; I hope we get some familiar voices on Simmons’s podcast, like Chuck Klosterman, Malcolm Gladwell and Michael Rapaport, on the show, and soon. But especially Michael Rapaport.