We Taste Test Feed the Beast 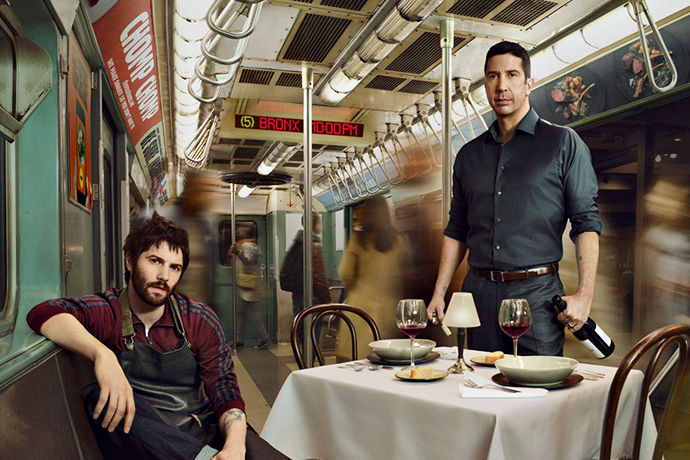 Lot of entertainment out there for you these days. You’ve got your Netflixes. Your HBOs. Your Hulus. Bottom line is, you can’t watch everything. So here’s a little primer to help you decide whether a new show is worth your precious downtime. We take a dip in to see how things are progressing... This week: we check out Feed the Beast, now on AMC.

Quick synopsis: David Schwimmer plays a widowed, alcoholic sommelier named Tommy. He’s raising a son in a space that was intended to be the Bronx restaurant he dreamed of running with his wife before she was slain and his now-incarcerated best friend, Dion (Jim Sturgess). Then said bestie gets sprung from the clink and seeks to revive the project. So he can pay his mob debts. And score better coke.

How you’ll describe it to your friends: It’s a show about Ross from Friends trying to start a restaurant in the Bronx. With some other white guy. And a bunch of other stuff happens.

Why it’s relevant to our cultural moment: Food. It took television a minute, but there’s finally a scripted show capitalizing on today’s mass food perversion beyond another cooking program or the loudmouth-dudes-eating-around-different-cities genre. “If the kids just want to sit around taking pictures of their food all day, we’ll give them pictures of food,” cried an imaginary network boss at the made-up greenlighting ceremony.

What’s good so far: The beautifully orchestrated cooking scenes and grizzled performance of The Wire’s John Doman as Tommy’s bitter dad are so far the only fire the show has to offer. However, the premise is stocked with promise, seeing as it tackles the challenges of starting and running a restaurant in New York City.

What could use some work: With all the conflict a show about the restaurant industry inherently possesses, Feed the Beast feels the need to turn this into a run-of-the-mill gritty crime drama. The mob boss, to wit, is nicknamed “The Tooth Fairy” for going medieval on his victims’ bridgework. And he’s played by Kinsey from Mad Men. Scary.

There are lots of heavy hands in the writers’ proverbial kitchen. Overly contrived characters, their flaws, quirks and backstory riddle the setup and force the dull dialogue along. Tommy’s son won’t speak following his mother’s passing (that it’s one of the show’s best performances says something). We’re told Tommy is the world’s “best” sommelier a couple billion times.

The whole thing feels like it’d be stronger without the B-movie mafia stuff and soon-to-be-entangled subplots. AMC shows just can’t seem to stop throwing their characters higher up trees, since the formula worked so radically for Breaking Bad and Mad Men. But it should be paying more attention to getting us to like these characters first. It doesn’t help that the leads don’t demonstrate the acting chops needed to convey the long-standing, brotherly relationship the dialogue chunkily tells us they have.

Episode 1 grade: B-. The action begins with intrigue. Schwimmer is struggling to get by as a single parent with the bottle as his therapist. Dion slips some thugs after leaving prison. We’re off to the races. But it doesn’t take long before Jim Sturgess’s coked-to-the-septum turn as Dion wears thin. His performance reaches an 11 fast, denying him anywhere to go once he’s bounced off a few walls.

Episode 2 grade: C. This one really just plods along, introducing new characters who will clearly complicate the picture: the bubbly girl on Tommy’s jock, a menacing middle school bully, that damned gangster who shows up everywhere, always at the worst/dramatically worthy moments. It’s pretty sweet when Tommy gets his ass kicked by a man in a wheelchair, though.

Episode 3 grade: B-. The energy picks back up a little here, as the mute son gets a boxing lesson from his estranged granddad, an improbable heist goes down, and our leads begin the development stage of the restaurant they’ve narrowly seen funded. The show finally gets a little looser in its skin as we meet the motley stars of Dion’s kitchen crew. Still, some of the plot strands don’t add up or make one want to come along just yet. Really, interest is evaporating by the time the credits roll.

Why it’s worth continuing: If the show can shake off some of its aspirations to be gritty, tense or complex and just let the drama flow, watching our heroes’ restitution or combustion could prove rewarding.