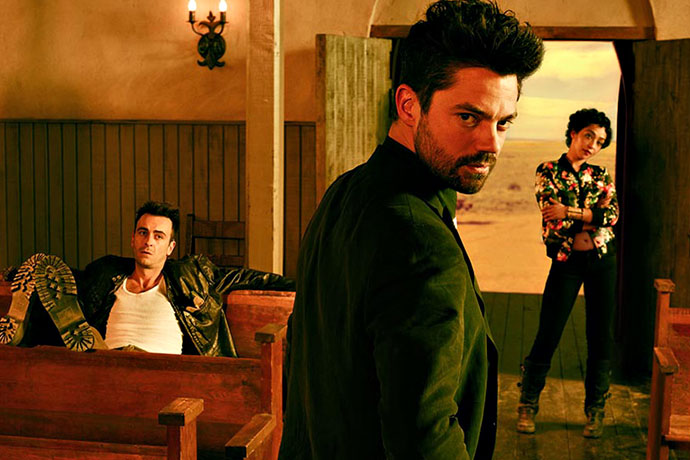 Lot of entertainment out there for you these days. You’ve got your Netflixes. Your HBOs. Your Hulus. Bottom line is, you can’t watch everything. So here’s a little primer to help you decide whether a new show is worth your precious downtime. We take a dip in to see how things are progressing... This week: we check out Preacher, now running Sundays on AMC.

Quick synopsis: An asskicker turned frustrated holy man tries to save his small godless Texas town from the talons of darkness, making a clean break from his violent past while striving to understand the universe’s purpose for him. Also, his ex-girlfriend is an assassin, his best friend is a drug-Hoovering Irish vampire, and he possesses a supernatural power he doesn’t quite understand. That old setup.

How you’ll describe it to your friends: “It’s adapted from a Southern gothic graphic novel and mixed with a little bit of X-Files, a few drops of True Blood, a splash of Justified and the color palette of Breaking Bad’s flashback scenes. Seth Rogen is a producer. Yes, that Seth Rogen.”

Why it’s relevant to our cultural moment: Preacher is an antihero for the Marvel Universe we collectively reside in. He’s a struggling human being trying to do something right for the world, even if it’s sometimes just easier to beat the hell out of the degenerates in his flock.

What’s good so far: It’s on AMC and the showrunner is Breaking Bad’s Sam Catlin. The show’s style is both bleak and eye-catching, with strong special effects and random bursts of totally bananas action. The acting can be strong, particularly from the charismatic bloke playing Irish vampire Cassidy. Also, Jackie Earle Haley is in it.

What could use some work: The splattered viscera can be a bit of a crutch for a show that—like the preacher himself—strives to point out the weakness of making violent choices. The precociousness of the preacher’s ex comes off almost as false as her Southern accent. Also, there’s a character who’s hard to look at because his face looks like a... well, we’d rather not say.

Episode 1 grade: B+. It’s clear things are going to take a while before we know what the hell this thing is about and if we care. There’s a whole town of characters to introduce, each dragging along a decent load of backstory with them. But the effects are cool, the setup is strange, and if tied together, this tale about a religious man fighting evil and running from his past could eventually prove habit-forming.

Episode 2 grade: B+. The opening, stretching back to the town’s original Old West sins, is stark and chilling. By now the preacher has been possessed by some kind of supernatural force, endowing him with serious powers of persuasion. To see him fight his baser instincts leads us to believe there could be something deeper going on than just watching limbs get chopped off.

Episode 3 grade: A-. As the preacher starts to understand his gift, the show’s potential is revealed. Here we have a man capable of extreme violence who may have found another way of saving the world from threats both homegrown and metaphysical.

Why it’s worth continuing: Here we have a show where almost anything could happen, given its supernatural setting. While on the surface it’s a fast-paced, ultra-violent comic book adaptation, there’s a deeper side. One that explores how to find your place at home and in the universe and live positively in a country that could use a savior. Or at least someone who cares.

Why it’s not: If you’re not a big fan of the kinds of things that happen in comic books—people’s hearts getting torn out, arms getting hacked off and people being best friends with bloodsuckers—you should probably skip it. For everyone else, you could always read Preacher instead of committing to another show. No one reads anymore.