What’s So Funny About This Bipolar Comedian? 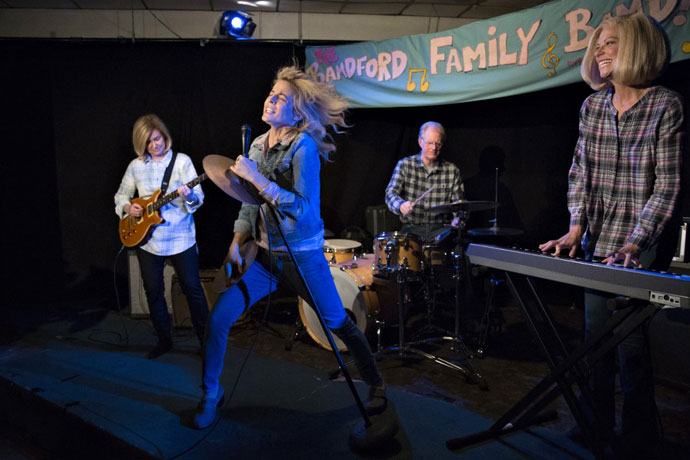 Lot of entertainment out there for you these days. You’ve got your Netflixes. Your HBOs. Your Hulus. Bottom line is, you can’t watch everything. So here’s a little primer to help you decide whether a new show is worth your precious downtime. We call it Three Episodes In. This week: we check out Lady Dynamite, now streaming on Netflix.

Quick synopsis: Comedian Maria Bamford tries to shape her budding career whilst navigating Hollywood sharks and schmucks then breaking occasional fourth walls in an attempt to keep this, her actual Netflix series, from too closely resembling Louie. Or Maron. Or Whitney. Or Lopez. Or Martin. Ha. Martin.

How you’ll describe it to your friends: “It’s a pretty batshit comedy about this comedian in LA, with a lot of 30 Rock–ish flashbacks and random Tim-and-Eric-ish weirdness and Curb Your Enthusiasm–esque social unease. The creator of Arrested Development is involved and lots of guest stars show up.”

What’s good so far: Bamford clearly attempts to bring something original to the “real-life comedian doing a comedy about their real life” genre. So naturally it involves actors actually breaking character to discuss how established molds can be shattered. Overall, though, the content feels original, if not the conceit.

And some of the writing and scenes can be damn funny. Also, the show is peppered with enjoyable performances by Ed Begley Jr., Patton Oswalt and Mira Sorvino, so far. The show is recommendable alone for the performance of Ana Gasteyer, as Bamford’s obnoxious agent.

What could use some work: The world of Lady Dynamite exists out of the natural rules of our own. So cars sometimes fly, people turn into barnyard animals and other randomness occurs that can distract from the general thrust of the story at hand. The humor also comes at a manic pace at times, especially in the pilot. So the viewer may feel a little bombarded by yucks at moments, with the truly hilarious elements coming off diluted by the rapid-fire delivery.

Though the show revels in its own attempts to maintain originality, and despite a lot of success in actually being original, the constant use of quick and sporadic cutscenes—well-abused in shows like Family Guy, 30 Rock and, of course, Arrested Development—comes off as a little fatigued.

Episode 1 grade: B+. The show is quick to distinguish its own voice and style, and stars a sunny presence surrounded by strong character actors. Patton Oswalt nearly steals the show as a cycling cop, but Gasteyer is the standout.

Episode 2 grade: B+. Maria dates a man with a troubled past. Hilarity ensues. A storyline centering on a ramen company named Pussy Noodle seemed to think it was funnier than it actually was.

Episode 3 grade: B. Maria gets a part in a TV show and worries that everything she is doing is racist. Or that worrying about it is racist. Or something. And it kind of makes a point. But sort of also doesn’t.

Why it’s worth continuing: It’s got some really funny moments and some that don’t totally work. But at least not for a lack of taking an unexpected chance. The episodes are also short and Sarah Silverman is in one of them. So we must watch on.

Why it’s not: There’s a little eye-rolling to be had over some of the humor, for sure. Moments that are intended to be weird come off as such, leaving extra work in figuring out if they’re meant as metaphorical in context or just plain odd. There are days when that’s more work than we need from the TV. And we’re behind on Silicon Valley.