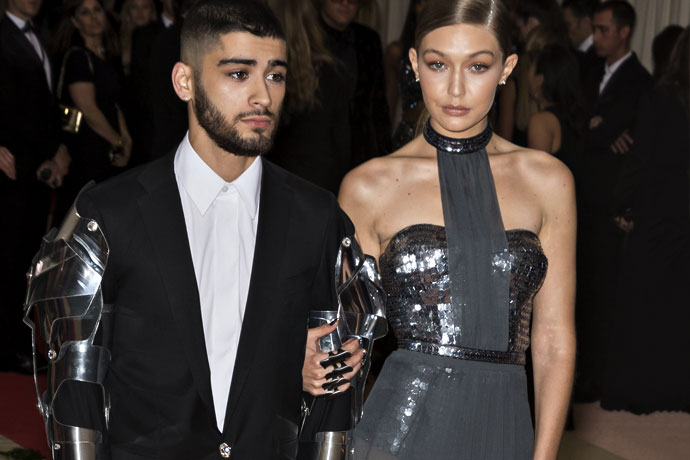 Just One More Late-Breaking Met Gala Judgment...
“I’ve just really come to enjoy watching the spectacle over the past couple years. For instance, I’m sure it’s out of context, but I love to think Gigi Hadid, who should so obviously be with me and not Zayn Malik, is thinking in this photo, ‘I really wish he would have consulted me before deciding on the whole arm thing.’ In any case, I was fascinated by Junkee’s take on the whole robo-chic vibe. I can’t look away...” —Geoff Rynex

“Burn the Witch” by Radiohead
“Released not more than 10 minutes before writing this, it’s a new video for Radiohead’s song ‘Burn the Witch.’ They already set the Internet ablaze by erasing their online presence. And now they’ve released a stop-motion video à la that ’60s cartoon Davey & Goliath. It looks like an homage to The Wicker Man. But I don’t know, I can’t tell. I’m too excited to give it any more intellectual thought than ‘Fuck yeah.’” —Nathan Wahl

Shoe Dog by Phil Knight
“A 24-year-old. A dream. A $50 loan. A small company that would eventually become one of the largest and most successful in the world. I’d read a story about that. And it looks like I might get to. A lot of books have been written about Phil Knight, but Shoe Dog: A Memoir by the Creator of Nike is the first one actually written by him. Which... okay, I’ll bite.” —Kelly Larson

Public Announcement
“I just caught on to this new podcast from a couple of well-respected media dudes in New York, Chris Black and James Ellis. The premise: two well-respected media dudes lift the veil on popular media while riffing on everything from the current state of Vice with the magazine’s new editor-in-chief to tracking down an old high school prankster who left a dead deer on Black’s family driveway. There’s also one about the time their buddies started a pop-punk band, became world famous and starred in an MTV reality show, and Ellis and Black were along for the ride. They’re all great listens. Also: that’s all of what’s been put out so far. Yeah, I just described all three pods (casts?) in their growing library. And at that rate, it’s worth subscribing.” —Najib Benouar

United Shades of America
“I watched comedian W. Kamau Bell’s new CNN show this weekend. In the first episode, he went to San Quentin to talk with some of the convicted. In the second, he mingled with various members of the KKK. The host is not only brave, clearly, but also quick and funny in some pretty hairy situations. The show does a great job of demystifying Americans we may fear, dislike or not understand, while looking at real people who are in the eye of some heavy national issues. Looking forward to wherever Bell may go next. And definitely wishing him safe travels.” —Hadley Tomicki