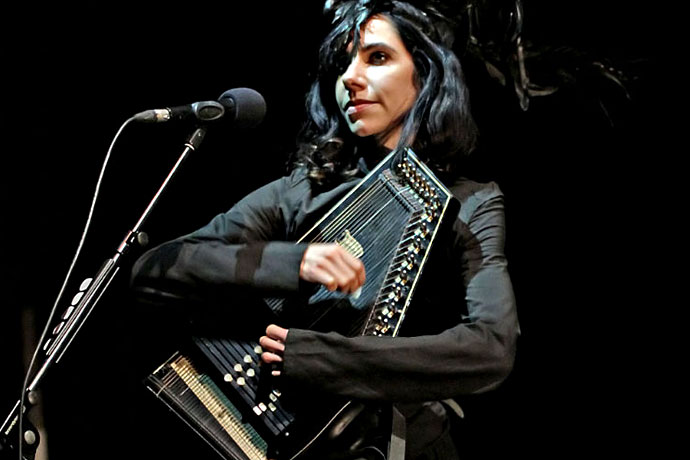 The Hope Six Demolition Project by PJ Harvey
“PJ Harvey has a new album, her first in about five years. It was recorded behind one-way glass in some sort of public art project that people could come and watch. The album has been getting a lot of flack from critics who say it’s cosmetically political, and that she’s casting a rather shallow eye at urban poverty and other issues in the US. I’m yet to wrap my head completely around the lyrics after just a listen or two, but the music sounds pretty fucking good as a start.” —Hadley Tomicki

Bernie’s Roving Indie Darling Festival
“Hey, he may have lost New York, but Bernie Sanders is quietly putting together the best series of concerts of the year so far. In the last week, he’s had Vampire Weekend play with members of Dirty Projectors, Grizzly Bear play their first show in two years and a rally with EPMD and TV on the Radio, and he introduced Run the Jewels at Coachella. Whatever happens with the primary, I’d have no problem streaming a Sanders ’16 playlist in the office.” —Geoff Rynex

The Night Manager
“I am not big on spy novels, so I wasn’t immediately hooked by AMC’s adaptation of John le Carré’s novel. It took a full four minutes. There was Tom Hiddleston playing Jon Pine, the world’s most dedicated hotel desk clerk, strolling purposefully through Cairo’s Arab Spring to get to work on time. There was the dark-eyed vixen you just knew was trouble. And then—bam!—she shows up with a fax she needs our hero to send. And, as you know, faxes are always such a pain in the ass. The point is: it really gets good quick. So if you didn’t watch, stream it now before episode 2 airs next week.” —Chris LaMorte

Father John Misty’s Instagram
“I had the pleasure of seeing the man play in Chicago this past Friday. He’s a great performer, in a not-really-giving-a-shit sort of way, and the antithesis to those nauseatingly sincere indie-pop-folk-rock-whatever groups that get all the radio play (you know, the ones always prancing through open fields and dilapidated barns dressed like paupers hitching for a ride on a dirt road circa, like, 1910—yeah, those guys). Anyway, I consequently had the even greater pleasure of discovering Father John’s Instagram. Mostly, it’s just pictures of him staring at his phone at really awesome places, or stock photos of pretty people he’s ironically repurposed, or cartoonish screenshots that look like they’re from The Sims. On a whole, though, it’s a devilishly clever piece of satire. And I don’t use ‘devilishly’ lightly.” —Sam Eichner

Solitary
“I’ve always been fascinated by shows like Cops and Locked Up and Locked Up Abroad and... right. Prison shows. So when I heard that HBO is coming out with a new documentary (also part of this year’s Tribeca Film Festival) that chronicles the ‘lives’ of inmates at Red Onion State Prison in rural Virginia, particularly the parts where they live them in 8-by-10-foot cells for 23 hours a day, I geeked out a little bit. Sure, solitary confinement is under a lot of scrutiny these days, and I’m sure this doc will shed some deep and meaningful light on why that is, but I’ll mostly just be along for the ride.” —Kelly Larson