Yeezus Christ Superstar, Jeb!: The Musical and Other Broadway-Ready Adaptations

American Psycho Is on Broadway, So Why Not These? 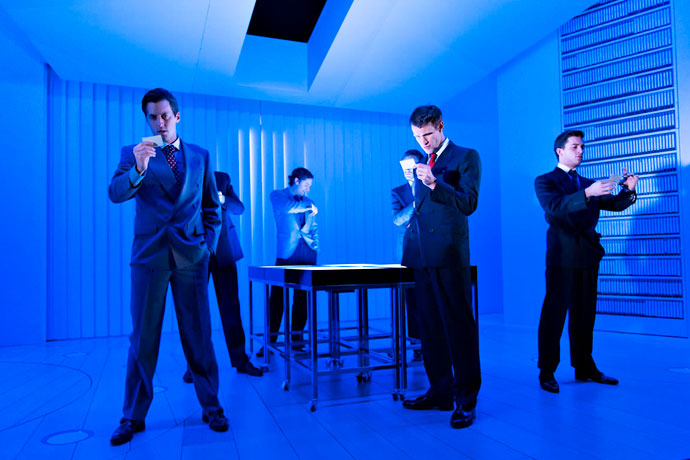 American Psycho: The Musical has opened for previews on Broadway.

Which got us thinking: if you could turn Bret Easton Ellis’s novel (and subsequent film) into a hit musical, what else can you give the ol’ song-and-dance treatment?

Nine answers to that hypothetical question are below for your consideration. It’s only eight or so too many.

The Source Material: The People v. O.J. Simpson.
The Concept: A Shakespearean retelling of the trial of the century involving ’80s dance music, an N.W.A-rapping Johnnie Cochran and a Whitney Houston–y love ballad between Marcia Clark and Chris Darden.
The Signature Song: “If the Glove Don’t Fit, You Must Acquit” featuring a Michael Jackson–esque dance routine with the black leather glove amidst a throng of Dancing Itos.
What the Critics Will Say: “The verdict is in: I’m totally guilty of tearing up during the Clark-Darden love ballad.”

The Source Material: The Matrix.
The Concept: In a preciously avant-garde production, ticket holders are presented with the option of taking a red pill or a blue pill upon entering the theater. Those who take the red pill watch a virtual-reality, EDM-based musical production of The Matrix; those who take the blue pill are led out of the theater and funneled into the audience for The Humans.
The Signature Song: “You’re the One, Neo”—it’s Laurence Fishburne’s voice sampled over throbbing dubstep.
What the Critics Will Say: “I didn’t get to see The Matrix, but I thoroughly enjoyed The Humans.”

The Source Material: Infinite Jest.
The Concept: Not to be outdone by the five-hour-long stage adaptation of Roberto Bolaño’s nearly 1,000-page novel, 2666, a heretofore unemployed yet still wildly ambitious thirtysomething male with an extensive liberal arts education decides to produce a day-and-a-half-long musical adaptation of David Foster Wallace’s kaleidoscopic chef d’oeuvre. As in the book, the surprise ending is that you have to start again at the beginning.
The Signature Song: The theme song to M*A*S*H, which is played on a perpetual loop in the background for the entirety of the show, which would totally make sense if you actually read the book.
What the Critics Will Say: “I felt like it would never end. Mostly because I’m not sure it ever did.”

The Source Material: Yeezus.
The Concept: A modern reimagining of Andrew Lloyd Webber’s classic, entitled Yeezus Christ Superstar. It stars Kanye West, Taylor Swift, a soulful church choir and, in place of tunics, ridiculously expensive, oversize white T-shirts.
The Signature Song: “Bound 2 (the Cross).” Oh, Kanye.
What the Critics Will Say: “It was way too long. Crazily self-indulgent. I’m not even sure it made any sense. And yet, by the end I found myself uncontrollably weeping.”

The Source Material: Serial.
The Concept: It’s called Serial: One Musical, Told Song-by-Song. Audience members tune in via headsets. Sarah Koenig narrates from downstage right, while Ira Glass sits cross-legged behind her, idly taking notes. In a verisimilar twist, the show purposefully loses steam during the second act and half the audience gets up to exit the theater.
The Signature Song: “The MailChimp Song.” Because this is NPR, and the production is reliant on the generosity of sponsors and donations from listeners like you.
What the Critics Will Say: “Serial is defiantly unsexy. But I guess that’s what you get when you stage a musical production starring a person who sits in an empty room talking to a microphone for a living.”

The Source Material: CSI.
The Concept: CSI: Broadway—the final frontier for network crime procedurals.
The Signature Song: “The Killer Has Diabetic Ketoacidosis.” It’s the lab technician musical solo you never asked for.
What the Critics Will Say: “I guess it was only a matter of time. They were running out of major cities, and not even diehards would tune in for CSI: Cleveland.”

The Source Material: Deadpool.
The Concept: An action musical parody dedicated to poking fun at its failed Broadway antecedent, Spider-Man: Turn Off the Dark.
The Signature Song: “Show Canceled Due to Technical Challenges”—a pre-intermission song-and-dance medley listing, in vivid detail, the litany of issues that plagued the production of Spider-Man.
What the Critics Will Say: “These Deadpool guys really have it out for Spidey.”

The Source Material: Synecdoche, New York.
The Concept: An impossibly complicated musical adaptation of a movie about a theater director whose magnum opus begins to blur the lines between the world of his production and the world outside, which in and of itself begins to blur the lines between fiction and reality.
The Signature Song: “Die”—wherein a slowly swelling chorus repeats the show’s final cue before the curtains close.
What the Critics Will Say: “My head hurts and I need an Advil. Bravo, though.”

The Source Material: Jeb Bush.
The Concept: The former governor turns to his secret passion—musical theater—in an attempt to exorcise his inner demons, all of which bear a striking resemblance to Donald Trump. Starring Bush himself, Jeb!: The Musical documents one man’s tragic descent into obsolescence.
The Signature Song: “I Endorse Ted Cruz for President”—the last gasp from a tortured soul. There’s not a dry eye in the Coral Gables Community House. Except for Ted Cruz, who is physically incapable of shedding tears.
What the Critics Will Say: “Surprisingly, this is only the third-most embarrassing thing a Bush has ever done. Say what you will about Jeb’s political gamesmanship—the man can fucking sing.”