Are You a Don Draper or a Richie Finestra? 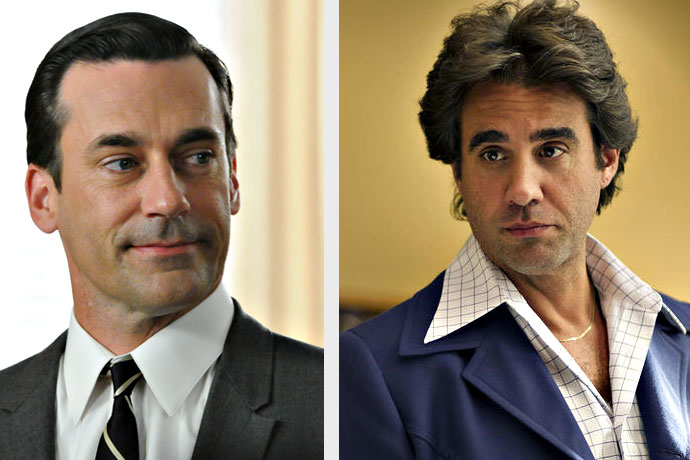 By now, you’ve probably heard more than a few hot takes on the similarities between Mad Men and HBO’s new show, Vinyl.

Today, two writers who are too young to have actually experienced either period in American history wax nostalgic (read: argue romantically) for their preferred NYC-based era.

On the Mad Men side is Sam Eichner; on the Vinyl side, Kelly Larson.

Sam Eichner: In the interest of a fair debate, I will admit right away that—for two people debating these eras primarily through the prism of television—Mad Men has the clear advantage. It’s seared itself into the culture (and my brain) in a way Vinyl may never be able to; equally important, it’s naturally covered a greater span of time (the entire decade) in its almost eight years on air thanVinyl has in its first six episodes.

Those concessions aside, I’ll start this conversation where Vinyl so thunderously begins: cocaine. More broadly, the glamour of 1970s excess—personified by the wired and fascinatingly unhinged Bobby Cannavale—versus the lackadaisicalness of 1960s counterculture.

Simply put, Vinyl’s ’70s seems intimidating. I think I’d be far more inclined to toke up with some beatnik hippies, imitate Ginsberg and contemplate the smallness of our existence in a field somewhere. Especially if Rosemarie DeWitt is involved...

I guess I should start by saying that I’ve never really been a drugs guy. I’ve never really been a music guy, either. Like, a music guy. The kind who wears the Joy Division T-shirt and “catches shows” and “thinks that the last album was cool and all but the production was too over-the-top and the writing was uncharacteristically presumptuous.” That said, observing the seedy, tragic, sexed-up, corrupt, violent, cocky and exhilarating inner workings of both of those worlds from the sidelines is... well, it’s just fun.

Especially with a backdrop of 1970s New York City. If I 1) lived in that place during that era, and 2) took everything I saw in Vinyl as gospel, I’d be living a pretty different life. A life where I would send my secretary (because I could call her that back then) out for a poppy seed bagel with no poppy seeds, rip my shirt off, do some blow during a client meeting and run out to verbally abuse a few local DJs, all before my noon paddle tennis match with young Basquiat that Andy Warhol net-judges.

SE: If Richie Finestra’s New York is a ride one would be terrified to get on but even more terrified to get off, Don Draper’s is a suburban train car in which you’ve been lulled asleep that’s coming dangerously close to running off the tracks. It’s the illusion of stability that belies a maelstrom of extramarital alleyway sex and hidden Canadian Club whiskey. Which I’m weirdly into.

See, I want the facade. I want the outdated sense of decorum. Poppy-seed-less poppy seed bagels be damned. I want the glossy afterimage of a waking American dream flitting under my eyelids as I dive headfirst into the underbelly of New York City. An attractive aspect of a Mad Men–style 1960s was the set of societal rules and norms left over from the previous generation that the characters were purportedly following, but that they ended up subverting at every turn. Where Finestra is explicit and extroverted, Draper is implicit and introspective; where Vinyl’s ’70s contains nudity, Mad Men’s ’60s contains layers of dress and its concomitant stages of undress. I like the idea of putting on a sober front at some black-tie advertising gala while secretly deploying my drunken charm to hit on unsuspecting cocktail waitresses with nothing but a series of long, stoic stares. And while I’m not a fan of the Pete Campbell–trademarked fully clothed copulation, there’s something inherently sexy about wading through all that subtext that really appeals to me in this, the age of oversharing, social media, blah blah blah.

Also, though I realize I’m in trouble if I bring up the wives here (because, Olivia Wilde), I’m far more interested in unpacking the complexities of a Betty Draper than a Devon Finestra. Just sayin’.

KL: You make some fair points. But I personally don’t have the patience to humor an entire cast of characters through their various neuroses and overcomplicated whatever-elses over a period of several seasons. I want my satisfaction quick and dirty. I want to live fast and die young. At least that’s what my sitting-there-watching-HBO self wants.

It’s not going to take a full season to figure out that Finestra’s a self-destructive turd. It’s going to take the first 30 seconds of the first episode, and I like that. He’s a product of his environment. Of his city and of his decade.

It’s about freedom. It’s about expressing yourself in new ways. It’s about walking past the Chelsea Hotel and hearing some unsigned British punk band wailing away through open windows. I literally have no idea what I’m talking about, but I like myself right now. Also, fondue. There’s no thought there. Just... fondue.

SE: Just when you think you have a leg up in a silly hypothetical debate, someone goes and throws a fondue-shaped wrench in your illogic, and the whole fucking thing falls apart.

To parry: I guess what it comes down to is whether you want the slow burn or the quick hit of mind-numbing euphoria, blatant drug references intended. I treasure the slow burn—the gentle coddling of a decade that gives way, viscously, into a sudden bottoming-out, or what Joan Didion liked to call [famous quote I can’t quite remember, it was from that book, with the title]. In what other era can I flee the mid-century modern digs of my Fifth Avenue apartment in a three-piece suit to rescue my flower child from an upstate hippie commune? In what other era were there even flower children at all?

I ask you, what would you prefer: total freedom of mind, body and soul or victoriously wresting that freedom away from a patriarchal society dead set on keeping you—Ms. Sally Draper, Sally, “young lady”—in line for a resentment-filled life of dishes, childcare and tepid pot roast?

KL: Sorry, I couldn’t hear you over the sound of me turning the Vinyl intro song up to 11 and getting ready to enjoy the ride. A ride that I was never on, but one that I still love living vicariously through. Maybe this is a good time to admit that ’60s NYC didn’t seem all that bad, either. I guess I could’ve saved us some time here. Or am I just playing you in a way that somehow makes my pockets fatter so I can finance my illicit diversions and maybe sign a promising young funk act like Sly & the Family Stone? You’ll never know, Sam. You’ll never know.