Three Episodes In: The Characters

Checking In on Netflix’s Newest Experiment 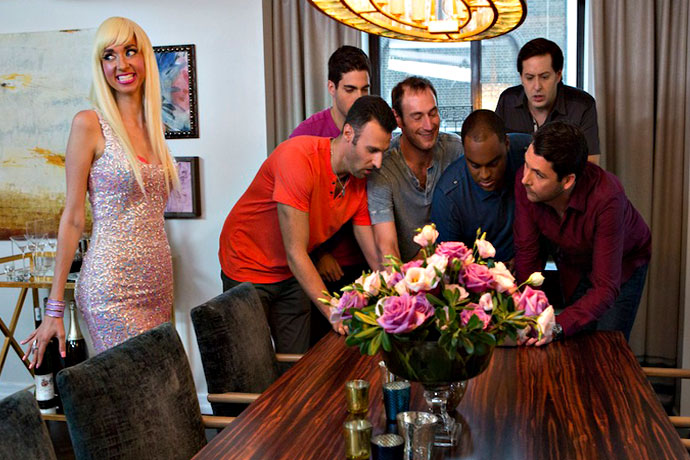 Lot of entertainment out there for you these days. You’ve got your Netflixes. Your HBOs. Your Hulus. Bottom line is, you can’t watch everything. So here’s a little primer to help you decide whether a new show is worth your precious downtime. We take a dip in to see how things are progressing... This week: we check out The Characters, now streaming on Netflix.

Quick synopsis: Netflix gives eight comedians you’ve seen in movies before as quirky best friends but whose names you probably don’t recognize a half hour to breathe new life into their favorite character sketches.

Why it’s relevant to our cultural moment: If you required proof that we’ve reached peak “comic-cum-showrunner” television, The Characters is it. The series is perhaps more interesting purely as a marker of where the industry is at than as a show itself. Which... isn’t great.

What’s good so far: The Characters is non-serial, so it’s difficult to pass judgment on the series as a whole. In each of the first three episodes, the comedian in question used a different conceit to string together their cast of sketch-like characters—all of whom are played by that episode’s comedian—into a cohesive episode. Here’s what I will say: the concept can work, but its success is completely at the mercy of each comedian.

Only one so far has really jelled. While John Early’s characters were wildly different—a Christian-leaning stand-up; an upstaging, egotistical gay actor; a dim-witted bro—they all felt unified. At the same time, he managed to use eclectic (and funny) methods of mining his personal experience for something greater than jokes.

What could use some work: Too often the comedy veers into zaniness; thus far, The Characters aims for easy gags rather than wit—more Mad TV than SNL.

Though it attempts to showcase different comedians’ visions, the first three are all, at their core, self-absorbed assholes, playing up their self-absorbed assholery for laughs. There is little to none of the complex kindheartedness so inherent to Aziz Ansari’s Master of None, nor the poignant observations so prevalent in Louie. Of course, those two have been given an entire season (or five) to explore their protagonists. Maybe that’s the problem with something like The Characters—it bites off a little more than it has time to chew.

Miscellaneous quotes from the critic’s notebook: Making a sex tape with the Hamburglar; shy Kristen Wiig hair-stroking thing; “I was injured in a trust fall”; getting hung up on the names of old snacks; why is it jumping from Jesus to Buddy Holly; Grammy’s jammies; it’s like he’s not even trying to make any sense.

Episode 1 grade: C. Lauren Lapkus tried too hard to tie her cast of diverse characters together into one logical narrative. I wish she’d focused on one or two—particularly her vapid, variably hilarious Kim Kardashian–esque pop star, Whitney Peeps.

Episode 2 grade: B+. John Early linked his characters through a patchwork of vignettes that didn’t revolve around a single narrative as they did a single feeling or mood.

Episode 3 grade: D-. Henry Zebrowski’s episode was a mess. From a fellating squid to a fratty shawarma stand owner, it felt like a botched SNL sketch that continues, painfully unabated, for upward of 30 minutes.

Why it’s worth continuing: I can’t judge the episodes I haven’t seen based on the ones I have, so there could be a gem or two in there somewhere. But unless you’re a big fan of one of these eight comedians, I’d queue with caution.

Why it’s not: Thankfully, there’s no shortage of comedian-driven shows to watch these days. Even Rob Schneider’s got one. Also, please disregard the previous sentence.